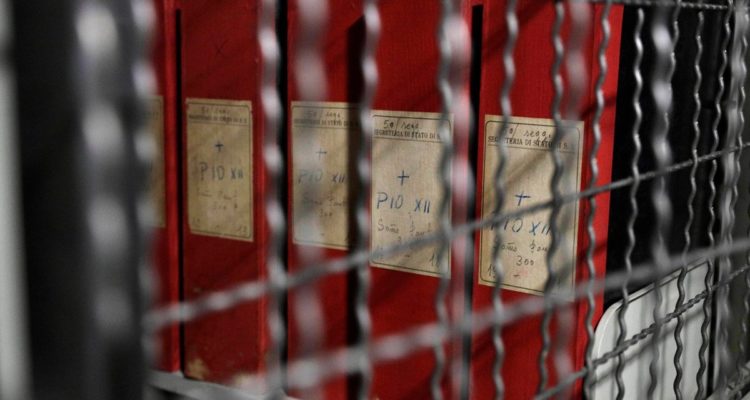 Folders marked with labels reading “Pius XII” are seen through a grating during a guided tour for media of the Vatican library on Pope Pius XII, at the Vatican, on 27th February, 2020. The Vatican’s apostolic library on the World War II-era Pope and his record during the Holocaust opened to researchers on 2nd March, 2020. (AP Photo/Gregorio Borgia)

After opening its trove of Pius XII’s papers to scholars in 2020, the Vatican is making available to the public almost 40,000 files containing appeals by Jews fearing Nazi persecution for help from the wartime Pope. The decision, announced on Thursday, follows reports by researchers and academics suggesting that the controversial Pope prioritised Catholic lives over Jews’.

The data, organised in 170 volumes under the succinct title “Jews”, will be available to all for free on the official website of the Historical Archive of the Vatican Secretariat of State. The documents will be displayed digitally with a description of the Vatican employee who read the pleas for help.

Only 70 per cent of the material Is available online immediately, with the following volumes being presented once they are ready.

Researchers have had access to these files in person since March, 2020, but the pandemic shut down or slowed their efforts to shed light on what is a controversial chapter in Catholic history.

Archbishop Paul Richard Gallagher, the Vatican’s equivalent to foreign minister, said the archival material “will allow the descendants of those who asked for help to find traces of their loved ones from any part of the world.”

The archive contains more than 2,700 cases of requests for help, often by entire families or groups.

The Vatican took pains to show that Pius was responsive to their pleas, describing the voluminous archive of names of Jews who asked for help as “Pacelli’s List,” using Pius’ family name to draw a parallel with “Schindler’s List,” the effort by the German industrialist to save Jews from the Holocaust:

“Although the two cases differ, the analogy perfectly expresses the idea that people in the corridors of the institution at the service of the Pontiff, worked tirelessly to provide Jewish people with practical help,” the Vatican announcement read.

Read the article by Claire Giangravé in Sight Magazine.