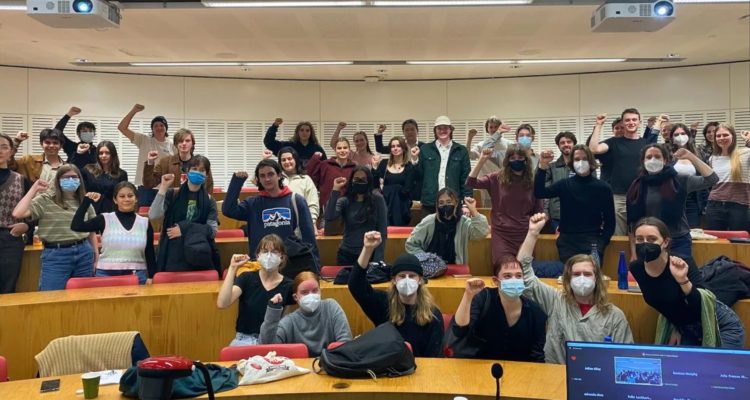 An image posted to the University of Sydney SRC's Facebook page after passing a motion decrying "Israeli apartheid". (Facebook)

The University of Sydney has condemned its student council’s anti-Israel stance, saying it does not tolerate “anti-Semitic language or behaviour on campus”.

University of Sydney vice-chancellor Mark Scott rebuked the student representative council in a letter to NSW Jewish Board of Deputies chief Darren Bark.

“The SRC’s motion does not represent the position of the University of Sydney,” read Mr Scott’s letter, dated June 23.

“We are reminding the SRC we believe they share a duty of care to their fellow students to ensure our campus remains one where racist, intimidating, abusive or threatening behaviours are not tolerated.

“Respect, inclusion and diversity are among our core values … including the need to avoid ­engaging in any bullying or discriminatory behaviour.”

The SRC on June 1 passed a motion endorsing the boycott, divestment and sanctions movement and denouncing the “Israeli occupation of Palestine and its system of militarised apartheid and ethnic cleansing”.

“To champion the cause of Palestine is a basic anti-imperialist and anti-racist act,” the preamble read. “Such solidarity is vital in a country like Australia, which stridently supports Israel and is built on the oppression of First Nations communities.”

SRC president Lauren Lancaster said she had not been aware of the letter. She said Sydney University had “made it clear they have no issue with pro-Israel ­Zionists. We will continue advocating against anti-Semitism and against racism, because neither are welcome at our universities or indeed anywhere.

Read the article by Noah Yim in The Australian.