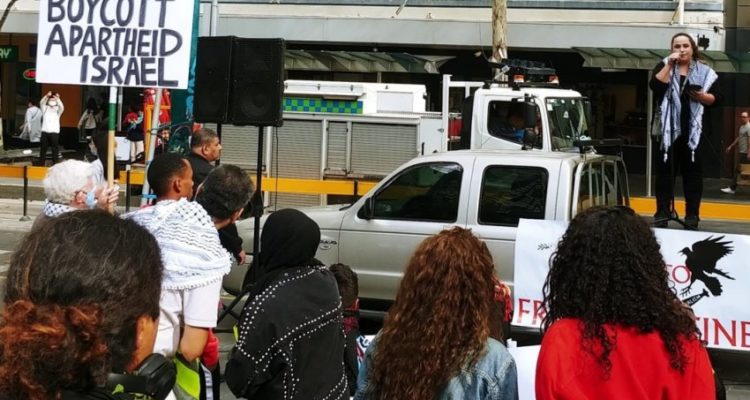 Rallying for justice for Palestine in May. (Jacob Andrewartha)

The University of Melbourne Student Union (UMSU) passed a motion in May that condemned Israeli apartheid and urged Boycotts, Divestment and Sanctions (BDS) against the “settler colonial apartheid state”.

The University of Melbourne (UM) falsely condemned the motion as “antisemitic” and, under threat of pro-Zionist legal action, the UMSU rescinded its motion.

Free speech faltered and falsehood triumphed at the UM and, potentially, at all universities across Australia.

The core academic ethos of good universities is reasoned opposition to falsehood and respect for truth and free speech. In this matter, the UM has violated and betrayed these fundamental academic imperatives by falsely defaming all anti-racist Jews, and all anti-racists who are critical of the crimes of Apartheid Israel.

This false defamation, anti-Jewish antisemitism and anti-Arab antisemitism soils the UM and damages all universities.

The World University Rankings 2022 ranked the UM 33rd, but this is inconsistent with a university that falsely defames and intimidates its students.

This scandal has serious financial implications for Australian universities and the economy. In the pre-COVID-19 year of 2019, the education industry serving students from overseas was worth $37.6 billion, more than the annual defence budget.

All nations need to have a complement of scholars and scientists for a variety of economic, health, national security and prestige reasons. But why do impoverished, circa 20-year-old undergraduate students have to pay for this?

Read the article by Gideon Polya in Green Left.