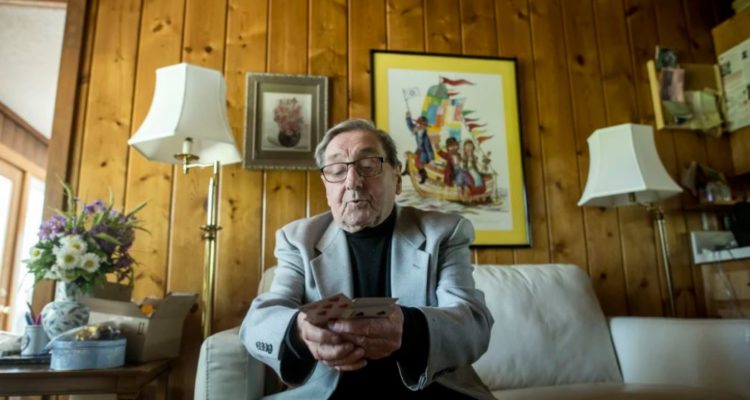 Werner Reich, a Holocaust survivor, practises a card trick he learnt from his bunkmate in Auschwitz, at his home in Smithtown, New York in 2017. (The New York Times)

In the Auschwitz barracks where starving, emaciated, dying men were crammed six to a bed, Werner Reich’s closest neighbor was a gentlemanly German Jewish man in his 30s named Herbert Levin, who had been known before World War II as Nivelli the magician.

One day in early 1944, Reich, then 16, returned to the barracks from a work assignment, climbed to the top of his three-tier bunk and watched Levin shuffle the dirty deck of cards that prison guards had given him so that he could entertain them – a bit of protection against being sent to the extermination camp’s gas chamber.

“And I couldn’t understand it, you know – having a deck of cards in Auschwitz was like finding a gorilla in your bathroom,” Reich recalled in a TEDx Talk in 2020. “And then Mr Levin turned to me and offered me the deck and said, ‘Pick a card.’ So I picked a card, and he performed a card trick for me.”

To a teenager who had never seen a card trick, he said, it was a “miracle”.

Levin explained the trick, and Reich replayed the instructions in his mind for the rest of his time at Auschwitz – a distraction that helped him survive its horrors – and then through a 56-kilometre death march in snow and ice on the way to the Mauthausen concentration camp in Austria. Only after he was liberated and found his way to England several years later did he buy a deck of cards and perform the magic on his own.

“And it worked,” he said. “It worked beautifully.”

Read the article in The Sydney Morning Herald (from The New York Times).