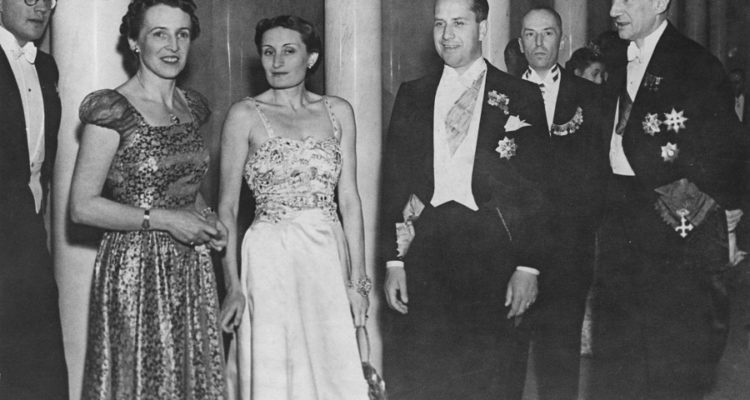 In the centre, Edda, Countess Ciano (1910 - 1995), daughter of Italian dictator Benito Mussolini, and her husband, Italian Foreign Minister Galeazzo Ciano (1903 - 1944). Pictured with the Polish Foreign Minister and his wife in 1939. Galeazzo Ciano's diaries recorded many conversations with diplomats and politicians, but were most damning of the Nazi leadership.

Secret diaries kept by Italy’s Foreign Minister, Galeazzo Ciano, before and during WW2, revealed that his fellow fascists in Germany wanted to go to war, with no provocation.

Three women – Ciano’s wife Edda, who was Mussolini’s daughter; Hilde Beetz, an Italian speaking German sp; and Frances de Chollet, an American socialite sent to infiltrate these circles – risked their lives to ensure the diaries would reach the Allies. The diaries would later be used as evidence against the Nazis at Nuremberg.

Guest: Tilar J Mazzeo, author of ‘Sisters in Resistance: how a German spy, a banker’s wife and Mussolini’s daughter outwitted the Nazis’ (Scribe)

Social historian and author of previous books of fiction and non-fiction, including The secret of Chanel No.5, and The Hotel on the Place Vendome.

Listen to the episode on Late Night Live.