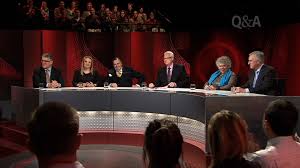 So is the ABC prepared to post a video by a convicted Holocaust denier and anti-semite Frederick Toben and not put up my pertinent video question (shown here), directed to Mark Steyn asking him to elaborate on the problems he foresaw with global Muslim immigration? Is this the extent to which Q&A is prepared to go with its disdainful political correctness and anti-Jewish-Israel bias? If so, utterly disgraceful.

Here is the video produced for inclusion on the ABC’s Q&A program’s video questions page.

The Frederick Toben video was eventually removed when the ABC’s Interactivity Producer Ainslee Hunter finally realised that she had promoted a video authored by a convicted Holocaust denier. However my video question could not be published because it allegedly featured content in breach of copyright. I was invited to re-record my question with my own likeness, which is clearly not copyright, and the ABC would kindly publish that.

P.S. Send me an email request if you want a copy of the Frederick Toben video