Statement Regarding Anti-Israel Rally in Sydney

A poster advertising the rally was “authorised and printed” by Senator Rhiannon using taxpayers’ money. 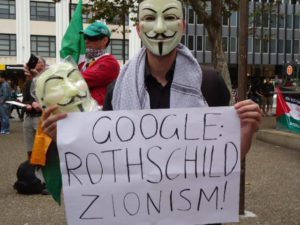 the rally was photographed holding a poster condemning “ROTHSCHILD ZIONISM”. The Rothschilds are a banking family of Jewish background, whom antisemites routinely refer to as ‘proof’ that Jews control the world’s money, media and politics.

JUSTIFY ANOTHER.” The anti-Israel campaigners have worked out that Holocaust denial isn’t credible, so instead they try to dilute the legacy of the Holocaust by calling every tragedy a ‘Holocaust’.

Robust discussion of the conflict and its human impact on both Israelis and Palestinians is completely legitimate and required for any peaceful resolution. However equating a war between two armed groups to the systematic, industrial-scale murder of millions of unarmed Jews by Nazi Germany is an insult not only to historical truth but also to the Jewish survivors.

We do not challenge the rights of individuals to attend these rallies, nor do we seek to stifle legitimate discussion of the conflict. However, much of the discourse at these rallies is not legitimate debate. Instead, it lays bare the unabashed hatred of Jews that has descended like a plague on the anti-Israel movement. Furthermore, it demonstrates that though these protestors speak of peace and justice, it is clearly a rhetorical smokescreen for their hatred, which is at the heart of their activism.

We call on Senator Rhiannon, the Socialist Alternative, the Australia Palestine Advocacy Network and Students for Palestine to publicly dissociate themselves from, and condemn, the many manifestations of antisemitism at the rallies they have supported. Sadly, the importation of anti-Jewish slurs into the anti-Israel discourse has created a toxic atmosphere on Australian campuses and serves to threaten and marginalise Jewish students.

It is time for the national leaders of the anti-Israel movement to either reject the antisemitism in their midst or to accept responsibility for it.

Michael is the AUJS National Chairperson