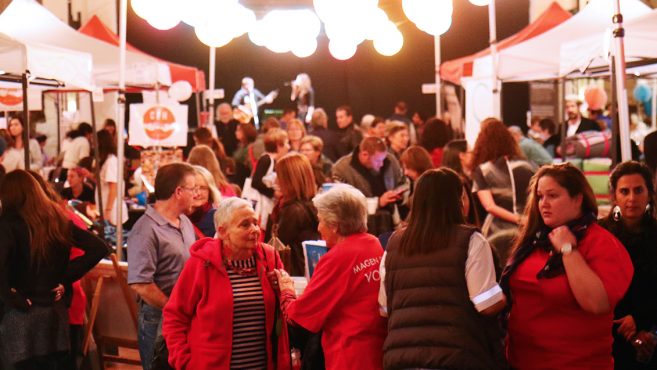 Uniting in memory of slain teens

MORE than 1000 people enjoyed Israeli street food and music at a night market run by Magen David Adom (MDA) to mark World Unity Day. It was held at the St Kilda Town Hall on June 1, and relived the spontaneous Jewish unity that evolved after the kidnapping and murder of three Israeli teens in 2014.

Inside the shuk, sampling delicacies like olives, baklava, halva and Israeli chocolates, visitors brushed up their moves with Zooz Israeli dancing, and tapped their feet to the rhythms of the Zemer Choir, the Isaiah band, the Kim Factor School of Dance, Sam Green and the Time Machine, Vered Harel and Gili, a DJ.

Attendees paused for video messages of thanks from Jerusalem Mayor Nir Barkat and MDA director general Eli Bin, as well as a message of support from Racheli Frenkel, mother of Naftali Frenkel, who, along with Gilad Shaar and Eyal Yifrach, was kidnapped and murdered by Palestinian terrorists on June 12, 2014.

Frenkel told attendees that despite the distance from Australia, she and the other parents could feel the support emanating from the night market event.