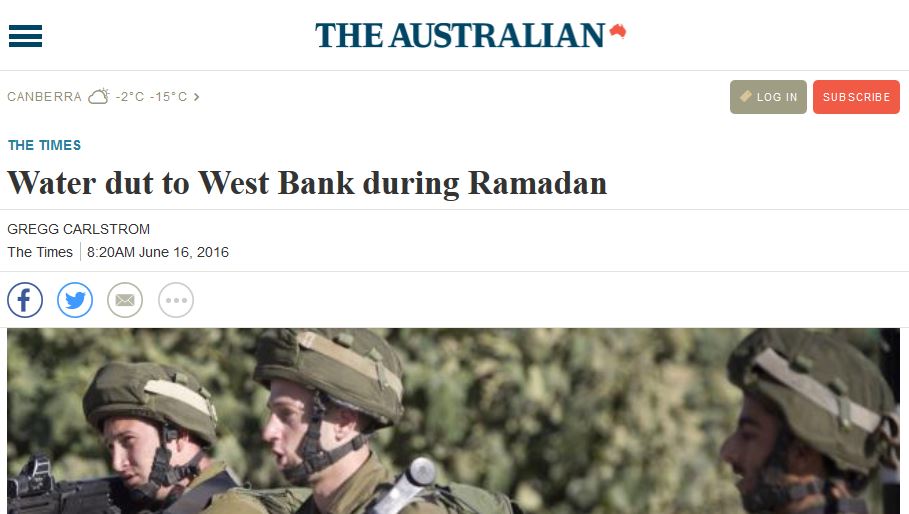 Tens of thousands of Palestinians have had their drinking water cut off during the month-long Ramadan holiday, according to Palestinian authorities.

The Israeli water supplier Mekorot has reduced the supply to Jenin and several villages around Nablus since earlier this week, affecting more than 40,000 people, according to Ragheb al-Haj Hassan, mayor of Jenin.

“This is a breach of the agreements between Mekorot and the Palestinians,” he said. Mekorot did not respond to a request for comment.

The cut-off comes at the start of summer, with temperatures in the West Bank projected to reach the mid-30s by next week. Many Palestinians fast from sunrise to sunset during Ramadan.

It was not immediately clear why the company had reduced the water supply.

More than 100,000 Palestinians live in villages without connections to the grid, forcing them to make do with rainwater or expensive supplies brought in by truck.

This report by Gregg Carlstrom originated from The Times.

[JMedia: Note the typo in the title of this article from The Australian, which might suggest the amount of thought that goes into publishing a article like this. Furthermore the article makes no mention of the fact that the water shortage arose from a problem with a water distribution pipe as has been reported by Al Jazeera.

It remains to be seen if The Australian rectifies this article but whatever happens suggests there are some pro-Palestinian desk editors out there pretty quick and willing to disseminate pro-Palestinian propaganda.

Read what Honest Reporting have to say about this.]