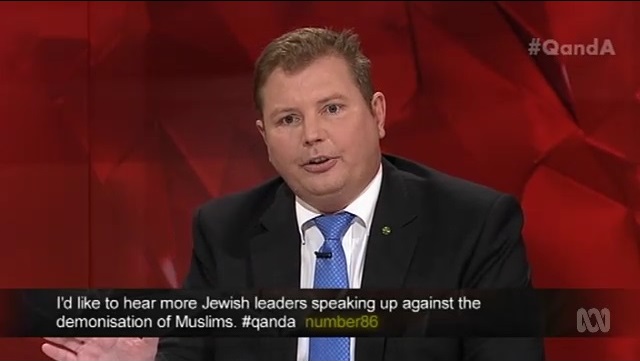 Last night Q&A aired and predictably with Muslim parliamentarian Ed Husic on the panel there were bound to be some commentary about the situation with Muslims in our society. The program has been titled ‘Incarceration, Islam and Innovation‘ on the Q&A website and there were a couple of tweets from the abundant twitter feed that the program receives that painted Jews and Israel in a bad light.

There was no recap of the Khaled Elomar incident that has since been revealed that Elomar has uttered much anti-Semitic tripe on his FaceBook page but was given the opportunity to speak out on Q&A last week. This can only be seen as the ABC Q&A program adding insult to injury.

The program’s Twitter selection team (whoever they are) managed to pick the following two tweets to show on screen (the first of which Jewish community leaders should find disturbing):

(Matt Briody) I’d like to hear more Jewish leaders speaking up against the demonisation of Muslims. #qanda

Andrew Bolt took up this story on The Bolt Report on Sky News.

Here are the tweets that came through to #QandA on the program mentioning Jews or Israel: