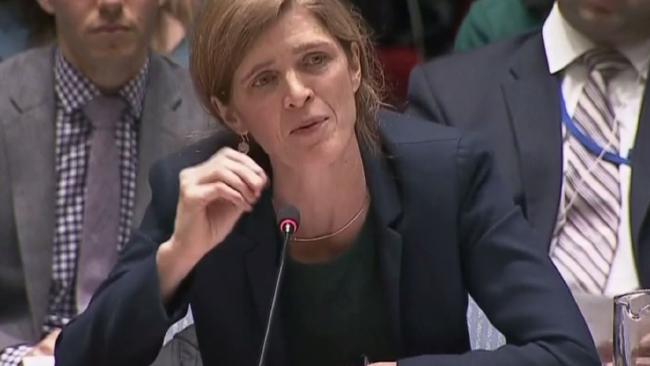 It’s all personal: a petulant act of pique from a lame-duck

It would be hard to see Barack Obama’s up-ending of four ­decades of bipartisan US policy in support of Israel at the UN Security Council as anything but an act of pique and petulance by a lame-duck president as he prepares to ride off into the sunset.

But it is also, as The Wall Street Journal points out, one of the most significant and defining ­moments of the Obama presidency.

By refusing to use the US veto to block a resolution condemning Israeli settlements as “a violation of international law” — and ­instead abstaining and thereby ­enabling the motion to be passed 14-0 — Obama has allowed his personal animus towards Prime Minister Benjamin Netanyahu, and his hostility towards incoming president Donald Trump, to get the better of sound judgment. He has changed course in a way no previous president, Democratic or Republican, has been ­prepared to do, tying the US to a policy towards Israel unlikely to be easily rescinded or overturned because of the likely use of their vetos by Russia and China.

No wonder Netanyahu and the Jewish lobby in the US is hopping mad about what is widely being seen as an “act of betrayal” by Obama.

Because of what Obama has done in abstaining rather than casting Washington’s usual veto when such extremist resolutions appear, the motion will now be ­entrenched in Security Council law, cited in European capitals and on campuses as a reason to back the global campaign of the boycott, sanctions and divestment movement against Israel.

Read the full article by Bruce Loudon at The Australian.