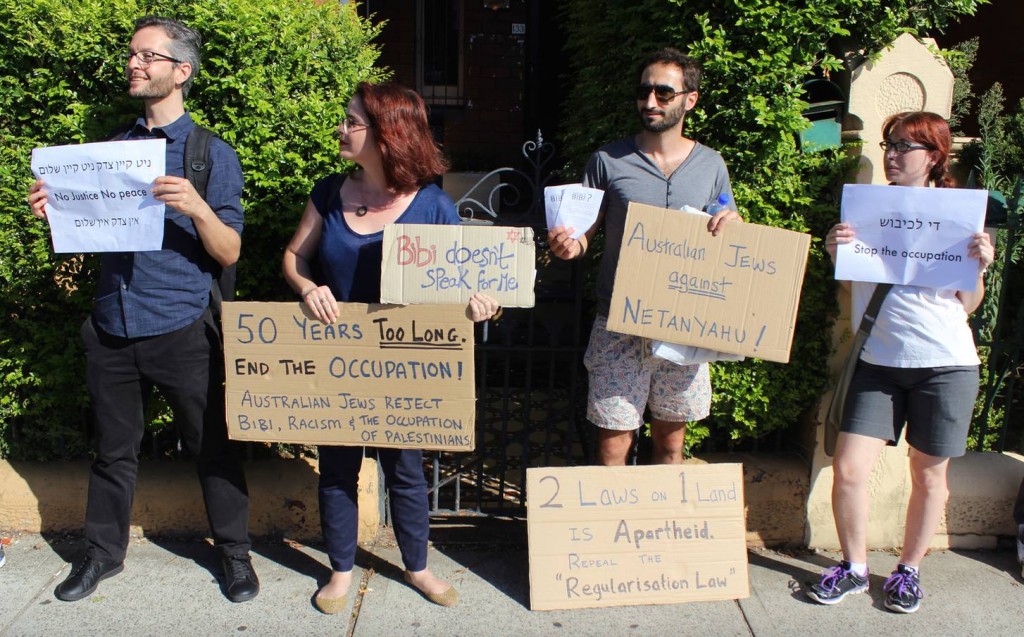 On Wednesday 22 February, I came together with a small group of left-wing Jews to protest the Israeli Prime Minister, Binyamin Netanyahu (colloquially known as Bibi), outside Central Synagogue in Bondi.

It was the height of Australian summer, the afternoon sun beating down on us and no shade in sight. A small bottle of sunscreen made the rounds. In total, our group numbered nine; at times the police surrounding exceeded even our size. We stood strong, all nine of us, in the heat, holding up our signs. This was my first small protest. Don’t get me wrong: I’ve gone to other large scale protests concerning various social justice issues, but here there was no place to hide in the crowd. Small as our group was, each of us was present, our face and signs exposed to passers-by. It was a feeling of at once vulnerability and strength. There was no option for us but to be seen. Seen by supporters, by opponents, and by security and police.

When we shared our photos on Twitter and Facebook some people commented on the size of our group, as if this is grounds to dismiss our message. But that’s exactly why we were there: to make very clear that the Israeli Prime Minister, who claims to speak for all Jews, doesn’t speak for us.

As a collective of individuals, each of us had our own pressing reason for coming to protest. What brought us together was a desire to express dissent of Netanyahu and his unjust policies targeting Palestinian people. Personally, as an Israeli citizen, my reason for protesting was twofold. First and most importantly, I stood in solidarity with my Palestinian friends who have spent their lives under Israeli occupation. I want them to know that there are Jews (even Israelis) who fight for them, fight with them. Second, my protest was also a sign of solidarity with left-wing Jews in Israel, who relentlessly protest Netanyahu’s administration, often time facing physical threats by violent right-wingers.

While the Israeli Prime Minister likes to repeat the fallacy that Israel is “the Only Democracy in the Middle East”, Israel holds nationalism dear and stifles out dissent. To me, silencing, threatening, and outlawing the mechanisms meant to keep government accountable is not democratic. For example, Netanyahu and his administration increasingly demonise any social justice organisation that exposes the realities of the Occupation. In 2016, the Israeli Parliament passed a law that singles out left-wing NGOs with the underlying purpose of stigmatising human rights. Most notable of these groups is Breaking the Silence, an organisation of former Israeli military soldiers turned whistleblowers who expose human rights violations. Now, Israel cares deeply about its soldiers – they are after all just young men and women, who live in a country where nationalism is a rule of law, doing what is legally required from them (military service in Israel is compulsory, and those who do not enlist face prison time). But I don’t understand how Israeli society and Israeli MPs can refer to someone such as Elor Azaria, the soldier who shot and murdered a neutralised Palestinian, as “son of our nation” and “the child of us all”, while treating soldiers – “children” of the same age – who expose military violence and human rights transgressions as traitors. Ok, I lie. I do know why Israel sees those soldiers who blindly serve the occupation as heroes, and those who dissent as enemies. I just wish it wasn’t that way.

Read the full article by Naama Carlin at The Vocal.