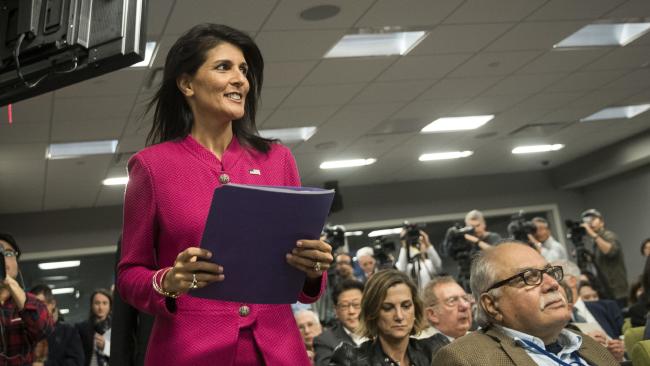 The UN must wonder what has hit it ever since Donald Trump’s ­ambassador arrived at the world body, declaring herself to be the ‘‘new sheriff in town’’.

Nikki Haley has launched an assault on what she calls the “stale” UN culture, calling it out for its incessant “Israel bashing” and taking on China, Russia and North Korea more directly than the White House.

She has called the UN’s Human Rights Council “corrupt” and wants a big shake-up of peacekeeping operations she labels wasteful and inefficient.

She has established herself as the darling of the Right and is touted as a future US secretary of state as she outshines the incumbent, Rex Tillerson, in the eyes of many.

Haley, 45, was forced to use yesterday’s press conference marking the day the US stepped up to rotating leadership of the ­Security Council to deny a rivalry with Tillerson.

She rubbished a report that Trump offered her the job as top US envoy before the adminis­tration was inaugurated.

“The original call that I ­received to go to Trump Tower was to discuss secretary of state,” she said. “No, he did not offer it.”

That only prompted a question about a run for the presidency.