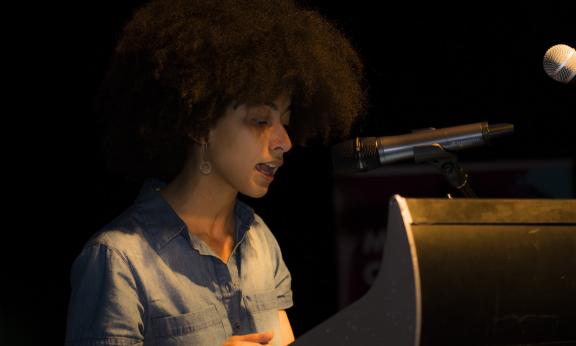 Marxism 2017 conference off to a flying start

The 2017 Marxism conference got off to a flying start in Melbourne tonight. Four hundred people packed into a big theatre at the Victorian College of the Arts (VCA) in South Melbourne to hear a panel of speakers talk about “Crisis, global resistance and the fight against the right”.

First up was Haley Pessin, an African American activist from upstate New York, who reported on the boost that the election of Donald Trump has given to racists in her country, but also the impetus it has given to popular resistance to the president’s right-wing agenda. These include the huge Women’s March and the airport protests against the introduction of the Muslim ban, along with smaller actions that are breaking out like spotfires all over the country. Haley explained that “Our job as socialists is to be tribunes of the oppressed, to contribute in every way to the resistance and to recognise that the fight for one group is a fight for all, and to fight for an entirely different kind of society, and that is socialism”.

Read the full article by Tom Bramble at Red Flag.