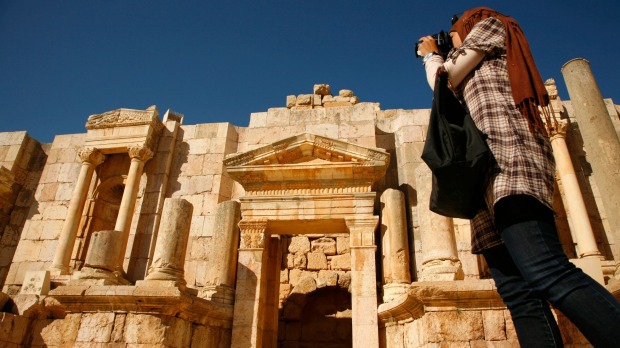 The road to ruins: Where Jordan meets Israel meets Syria

As international borders go, the one in the north-west corner of Jordan – where Jordan meets Israel meets Syria – is surely the most perplexing. From our hilltop perch amid the ruins of the ancient city of Gadara, we see Israel’s Sea of Galilee to our left, the disputed Golan Heights (occupied by Israel since 1967, but still claimed by Syria) to our right, and a snow-capped Mount Hermon marking the border with Lebanon, in the distance.

For those with religious inclinations, the region is part of the Holy Land – where Jesus performed miracles, walked on water, fed a cast of thousands – to geologists, it’s part of the Jordan Rift Valley caused by the separation of the African and Arabian Plates, to others it is simply home.

“This is a popular spot for Palestinian-Jordanians to come to look across to their homeland,” says our young Jordanian guide Ahmad Hussein, his arm sweeping across the hazy, olive-studded valley. “Most arrived in Jordan as refugees from the 1948 and 1967 Arab-Israeli wars.”