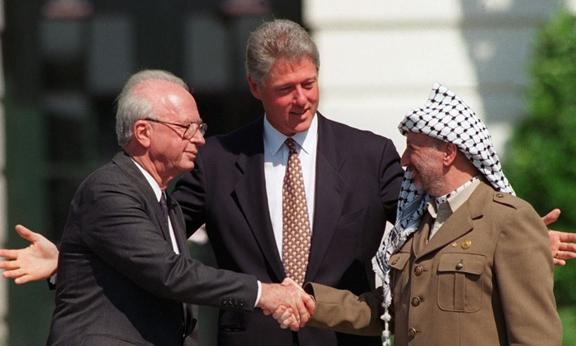 Trump lays bare US support for ethnic cleansing of Palestine

For 25 years, since a fateful handshake between former Palestine Liberation Organisation (PLO) leader Yasser Arafat and Israeli PM Yitzhak Rabin on the White House lawn ushered in the Oslo Accords, supporters of a single, democratic and secular state between the Jordan River and the Mediterranean Sea have been pilloried.

Under the Oslo Accords, the Palestinian Authority (PA) was created to exercise partial control over the occupied Palestinian territories of the West Bank and Gaza Strip. Key issues such as the status of Jerusalem and Israeli settlements, the right of return for Palestinian refugees displaced by Zionist militias when Israel was created and the borders of a future Palestinian state were left unresolved.

Today, an emboldened state of Israel, backed by the Trump administration’s recognition of Jerusalem as its capital, is determined to impose its own one-state solution on Palestinians: one that denies Palestinians a state of their own. Claiming it has no “partner for peace”, the Netanyahu government is realising Zionist ambitions to control all of historic Palestine and purge the territory of its indigenous inhabitants.

East Jerusalem, illegally occupied in 1967, is today home to more than 350,000 Israeli settlers, who outnumber the city’s historic Palestinian custodians; another 400,000 settlers defended by army convoys occupy large swathes of West Bank land. A network of checkpoints, walls and Israeli roads strangles the life out of Palestinian villages. Thousands of Palestinians who have defied the occupation are incarcerated in Israeli prisons under martial law.

US vice president Michael Pence’s 22 January address to the Knesset, Israel’s legislature, proved a potent metaphor for Zionism’s vision of a promised land expunged of its Arab inhabitants. As Pence began his address, 13 Palestinian parliamentarians were expelled for standing with placards declaring, “Jerusalem is the capital of Palestine”.

Ruling Likud party member Oren Hazan accused one of the Palestinian legislators of being a terrorist. Dissent, even from Israeli lawmakers, is not to be tolerated in “the only democracy in the Middle East”.

Yet Palestinians continue to resist.