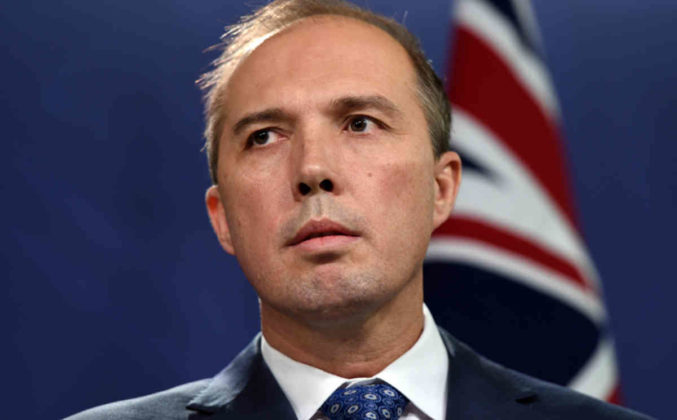 Federal Health Minister, Peter Dutton, answers a question at a press conference in Sydney on Wednesday, Nov. 5, 2014. The Commonwealth Government will increase Australia's $18 million contribution to the response to Ebola in West Africa and strengthen preparations to detect and respond to a possible Ebola case in Australia. (AAP Image/Paul Miller) NO ARCHIVING

Jewish groups have condemned prominent lawyer Julian Burnside for sharing a picture on Twitter depicting Peter Dutton as a Nazi.

Mr Burnside retweeted an image showing the Home Affairs Minister’s face superimposed on that of a Nazi official in a uniform which included the “death’s head” emblem used by the SS unit responsible for concentration camps.

Mr Burnside, a prominent barrister, has represented the likes of Alan Bond and Rose Porteous in court but he’s spent the past few years advocating for the rights of asylum seekers on Manus Island and Nauru.

He is a fierce critic of Mr Dutton and the current Coalition government and added to the retweet of the Nazi photo that Mr Dutton was “the most powerful MP in Australia, and arguably the least scrupulous.”

“He acts as if the rights of human beings are irrelevant, unless they happen to be in his electorate,” he wrote on Saturday.