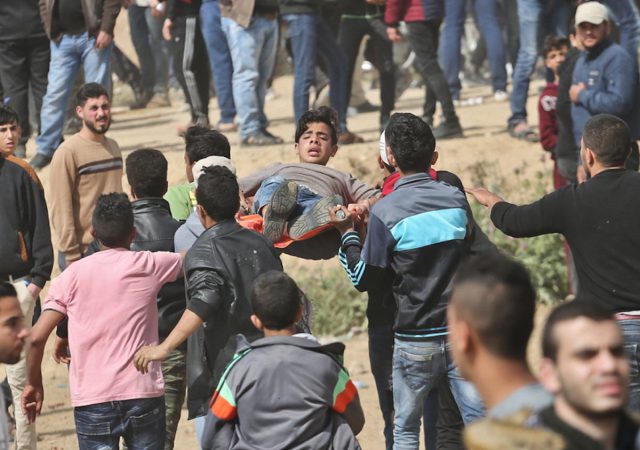 Events on the Gaza–Israel border during the past few days clearly demonstrate the irrelevance of the two-state solution to the Israel–Palestine conflict. On 30 March, as many as 30,000 Palestinians gathered at several points on the border between Israel and Gaza to observe the beginning of a six-week peaceful protest to mark ‘Land Day’ against the Israeli acquisition of Palestinian lands both within Israel and in the occupied territories.

Pent-up Palestinian frustrations—especially the consequence of the economic blockade imposed on Gaza by Israel for the past several years—conjoined with anger against Israeli denial for 70 years of the Palestinians’ right to return to their homes within Israel, soon led to acts of tire burning and stone throwing at Israeli troops posted on the border. This led to Israeli retaliation with live ammunition that left 15 Palestinian young men dead and possibly 1,000 wounded.

Despite these casualties the Palestinians are in no mood to leave their encampments on the border and further fatalities can be expected over the next few days. This demonstration of Palestinian rage is targeted both against Israeli oppression and the infirmity and irrelevance of the Palestinian Authority.

It’s also a rebuke aimed at Hamas, which rules Gaza, and the eternal feuding between PLO/Fatah and Hamas that has weakened their bargaining position vis-à-vis Israel. In fact, this feud has played into Israeli hands by allowing it to successfully make the argument that it doesn’t have a Palestinian counterpart with whom it can negotiate peace.

Read the full article by Mohammed Ayoob in The Strategist.