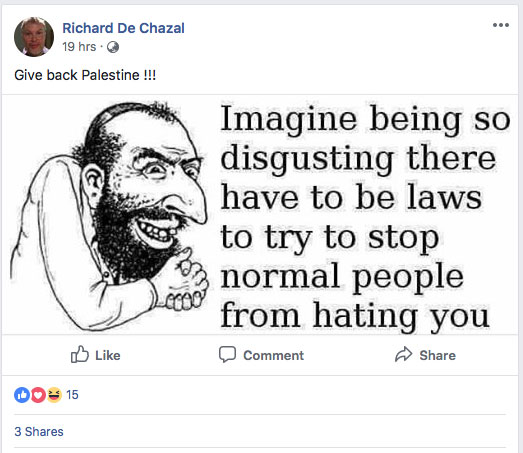 An award-winning fashion photographer who posted a caricature of a hook-nosed Jewish man on his Facebook page with the caption, “Imagine being so disgusting there have to be laws to try to stop normal people from hating you”, says he didn’t ­realise the post was anti-Semitic.

The image and caption were circulated after the NSW parliament last month unanimously passed legislation outlawing incitement to violence on the basis of race or religious affiliation.

De Chazal yesterday updated his post, saying he had been alerted that it was anti-Semitic.

“I did not know that — I thought it was a post referring to Israel seeking to make it illegal to criticise their actions and human rights violations re Palestine,” he wrote. “Anti-Semitism, just as all discrimination, racism and ­hatred, is wrong.”

Read the report by Rachel Baxendale in The Australian.