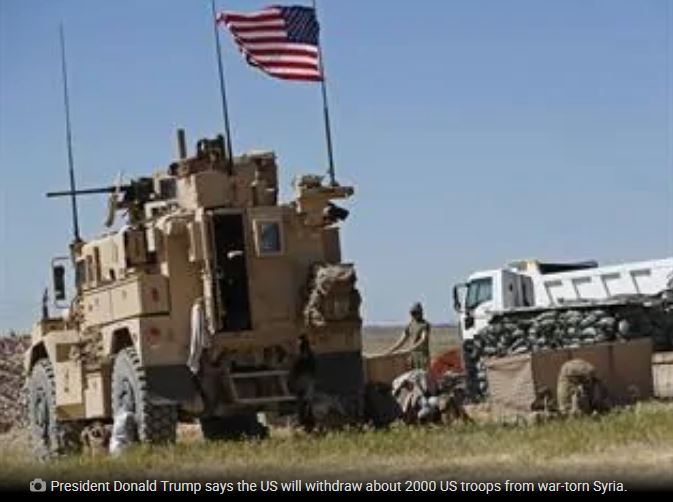 US air campaign in Syria ‘likely to end’

The United States will likely end its air campaign against Islamic State in Syria when it pulls out troops, US officials say, as President Donald Trump defends the planned withdrawal against criticism from allies abroad and at home.

US Defense Secretary Jim Mattis, who had opposed Trump’s decision on Syria, abruptly announced on Thursday he was resigning after meeting with the president. In a candid letter to Trump, the retired Marine general emphasised the importance of “showing respect” to allies.

NATO allies France and Germany say Washington’s change of course risks damaging the fight against Islamic State, the militant group that seized swathes of Iraq and Syria but has now been squeezed to a sliver of Syrian territory.

Members of Congress urged the president to backtrack, saying the withdrawal would strengthen the hand of Russia and Iran in Syria and enable a resurgence of Islamic State.

Trump, however, gave no sign of changing his mind and slammed Republican Senator Lindsey Graham, who said a withdrawal would have “devastating consequences” for the United States.

“So hard to believe that Lindsey Graham would be against saving soldier lives & billions of $$$,” Trump tweeted.

“Why are we fighting for our enemy, Syria, by staying & killing ISIS for them, Russia, Iran & other locals? Time to focus on our Country & bring our youth back home where they belong!”

Trump’s troop announcement on Wednesday caused consternation in domestic and foreign critics, who argued it would make it harder to find a diplomatic solution to Syria’s seven-year civil war.

Read the article by Phil Stewart and Ellen Francis (Deutsche Presse Agentur) in the Herald Sun.