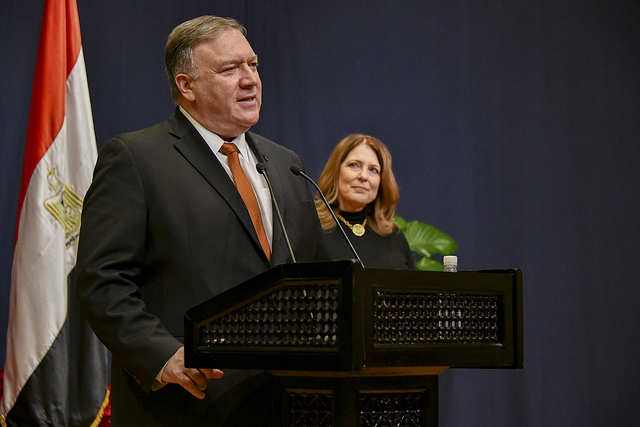 The Trump administration’s farewell to aims

Every now and then, a US political leader descends on Cairo to deliver an address outlining America’s policy objectives in the ever-challenging Middle East. In June 2005 the secretary of state, Condoleezza Rice, made waves with a speech that firmly put the promotion of freedom and democracy on the agenda.

‘For 60 years’, Rice observed, ‘the United States pursued stability at the expense of democracy in this region … and we achieved neither. Now, we are taking a different course. We are supporting the democratic aspirations of all people.’ And to those who would accuse the US of imposing democracy on the region, she responded, ‘In fact, the opposite is true. Democracy is never imposed. It is tyranny that must be imposed.’

Needless to say, a number of regional leaders were distinctly uncomfortable with the speech, given that it came just two years after the US invasion of Iraq. But Rice was also following up on the 2002 Arab Human Development Report, which had highlighted the region’s miserable conditions and made a clear case for long-term structural reforms.

Four years later, it was newly elected President Barack Obama’s turn to head to Cairo. In his speech, Obama downplayed the promotion of democracy and emphasised the need for a more harmonious relationship between the US and the entire Muslim world, while also calling for a resolution to regional conflicts.

On the Israel–Palestine question, whereas Rice’s speech had embraced a ‘vision of two democratic states living side by side in peace and security’, Obama went further, describing the Palestinians’ situation as ‘intolerable’ and harshly criticising Israel’s settlement activities.

This month, the current US secretary of state, Mike Pompeo, traveled to Cairo to deliver his own speech. And he made clear that the Trump administration’s approach to the region represents a stark departure from that of its predecessors.

Read the article by Carl Bildt on The Strategist.