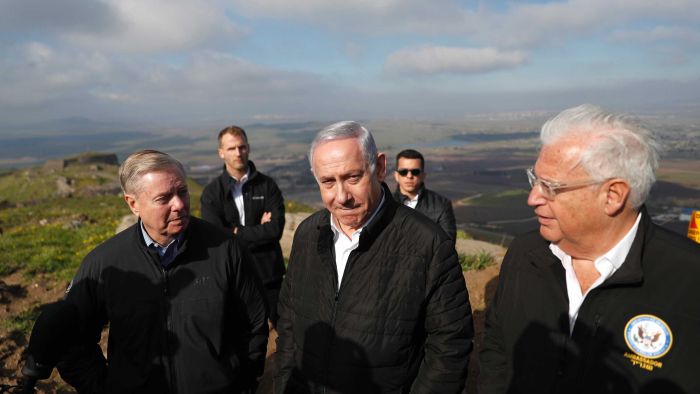 Responding to pressure from the Israeli Government, President Donald Trump has signaled via Twitter that his administration is poised to recognise Israeli sovereignty over the Golan Heights.

This change of posture over a highly disputed and strategically valuable territory between Israel and Syria is being met with delight, disapproval and indifference by various sides in the broader Arab-Israeli conflict, echoing reactions to an earlier US move – to treat Jerusalem as Israel’s capital.

As a scholar who teaches and writes about the Middle East and is currently writing a book about the Arab-Israeli conflict, I can put the Trump administration’s controversial decision in historical and legal context.

The Arab-Israeli conflict
Israel seized five territories from three countries during the 1967 War: the Gaza Strip and Sinai Peninsula from Egypt, East Jerusalem and the West Bank from Jordan, and the Golan Heights from Syria. The UN Security Council responded by passing the so-called “land for peace” resolution, or Resolution 242, which envisioned Israel exchanging the occupied territories for peace and recognition from surrounding Arab states. All members of the UN Security Council approved the resolution, including the United States.

Prior to the 1967 War, about 150,000 Syrians lived in the Golan Heights, but many were displaced by the conflict. Today, the territory is home to about 25,000 Druze Arabs who overwhelmingly see themselves as Syrian citizens and roughly 20,000 Jewish settlers who identify as Israelis. The status of the territory’s residents, all of whom have been eligible for citizenship since 1981, is not subject to change at this point.

At the end of the war, the two sides of the conflict disagreed on who should act first. The Arab states refused to negotiate until Israel withdrew from the occupied territories, while Israel refused to withdraw until the Arab states negotiated a peace deal. As a result, Israel continued to occupy the five territories and constructed settlements on them shortly after the war concluded.

Read the essay by Dina Badie on Sight Magazine.