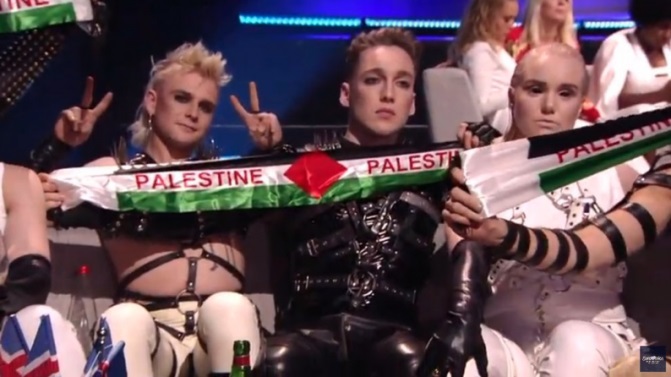 The great Eurovision Song Contest has wrapped for another year and ICYMI The Netherlands’ Duncan Laurence took out the whole thing with his song ‘Arcade’, while Aussie treasure Kate Miller-Heidke clocked in at a respectable ninth.

But the artist who’s got everyone talking is Icelandic techno-punk champions Hatari, who somehow managed to distract from their wild, fiery, bondage-heavy Eurovision performance with a political stunt.

Hatari flashed a Palestinian flag while sitting in the green room during the Eurovision grand final broadcast, a big no-no according to the Eurovision rulebook, and an act that could land them in some very hot water.

A chorus of boos and gasps erupted from the crowd when the Icelandic team unveiled the banners as their name was called out, with the band coming in 10th place with their song ‘Hatrið mun sigra’ (AKA ‘Hate Will Prevail’).

According to a statement by the European Broadcasting Union, sanctions could now be imposed on the Icelandic delegation as a result of the stunt.

Their statement reads (via ESC Today):

“In the live broadcast of the Eurovision Song Contest Grand Final, Hatari, the Icelandic act, briefly displayed small Palestinian banners whilst sat in the Green Room. The Eurovision Song Contest is a non-political event and this directly contradicts the contest’s rules. The banners were quickly removed and the consequences of this action will be discussed by the Reference Group (the contest’s executive board) after the contest.”

ICYMI the 2019 instalment of Eurovision took place in the Israeli city of Tel Aviv, sparking calls to boycott the event due to Israel’s policies towards Palestinians in the occupied lands of West Bank and Gaza.

Read the article by Emmy Mack on Music Feeds.