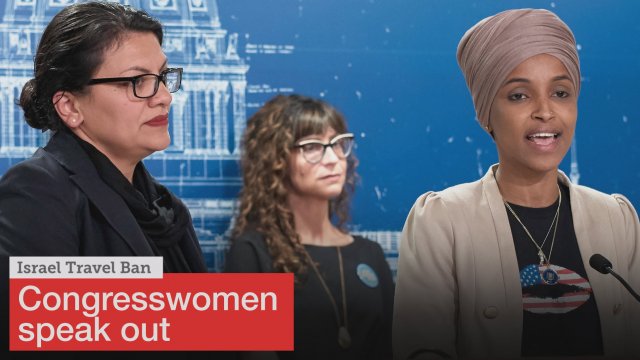 Democratic American congresswomen Rashida Tlaib and Ilhan Omar told reporters in Minnesota on Monday that Israel’s move to restrict their travel in the region pits Muslim and Jewish people against one another.

A tearful US Congresswoman Rashida Tlaib said on Monday that her Palestinian grandmother told her last week not to visit Israel under conditions demanded by the Israeli government.

Tlaib said she had considered accepting Israeli demands to not engage in politics so that she could travel to the West Bank and visit her grandmother, who is around 90 years old.

“She said I’m her dream manifested, I’m her free bird, so why would I come back and be caged and bow down, when my election rose her head up high, gave her dignity for the first time?” Tlaib told reporters.

“And so through tears, at 3:00 in the morning, we all decided as a family that I could not go until I was a free United States congresswoman.”

Tlaib and Ilhan Omar, the first two Muslim women ever elected to the US Congress, had planned a trip last week to the Jewish state and Palestinian territories, where they expected to meet with activists and officials on both sides.

Read the article and watch the video on SBS TV News.