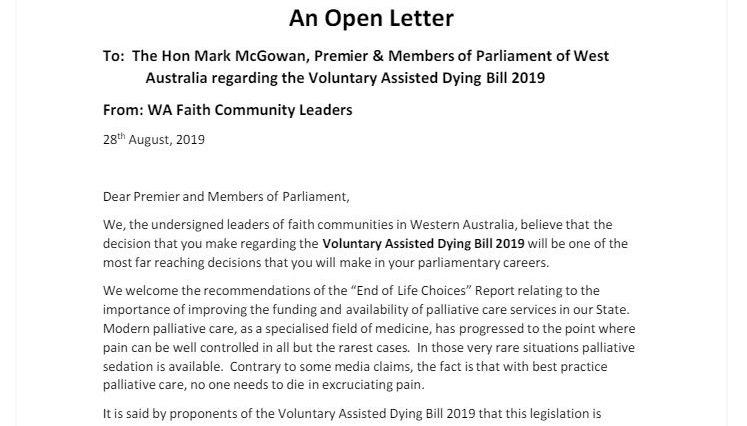 Signed jointly by Islamic, Jewish, Sikh and Christian leaders, the letter details the reasons why their faith communities are opposing the legislation.

“Human dignity is honoured in living life, not in taking it,” the letter said.

“Even though an act to actively terminate an ill person’s life may be motivated by a sense of compassion, true compassion motivates us to remain with those who are dying, understanding and supporting them through their time of need, rather than simply acceding to a request to have their life terminated.

“Actively terminating a person’s life represents the abandonment of those who are in greatest need of our care and support.”

The sigantories to the letter, which include the Catholic and Anglican Archbishops of Perth, Perth’s Chief Rabbi, Islamic Council presidents and the president of WA’s Sikh Association, called on MPs to reject legislastion which would “give legal sanction to a doctor assisting a person to commit suicide” and undermine trust in doctors.

Read the article by Nathan Hondros in The Sydney Morning Herald.