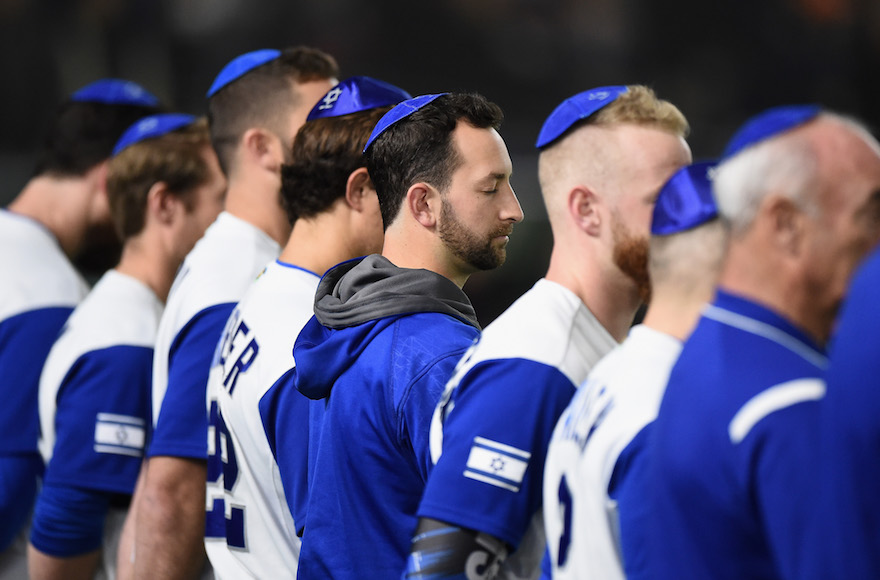 TOKYO, JAPAN - MARCH 13: Israel players line up for the national anthem prior to the World Baseball Classic Pool E Game Three between Netherlands and Israel at the Tokyo Dome on March 13, 2017 in Tokyo, Japan. (Photo by Matt Roberts/Getty Images)

The underdog Israeli team that emerged as a sensation at the 2017 World Baseball Classic came with an asterisk.

Despite the name of the country splashed across their uniforms, almost none of the players who helped upset powerhouses like South Korea, Chinese Taipei and Cuba were actually Israeli.

Instead, the roster featured a collection of Americans participating under the tournament’s heritage rule, which granted eligibility to anybody with a Jewish grandparent or spouse.

Buoyed by that success, Israel hopes to earn a spot in the Tokyo Olympics next year, with baseball returning to the program for the first time since 2008. Unlike the WBC, the Olympic Charter requires all athletes to be a national of the country they represent — a problem, since only about 1000 people play baseball in Israel.

So Israel found a solution: Over the past year, more than a dozen Jewish-American professional ballplayers have obtained Israeli citizenship under the nation’s Law of Return, a process known as making aliyah — Hebrew for “ascent.” With their help, Israel is one of 12 teams currently playing in the European championship, with the top five advancing to the Olympic qualifiers in Italy.

“Playing for us was the impetus for this,” said Israel Association of Baseball president Peter Kurz. “But they all feel something toward Israel. There’s a feeling among them that we’re doing something more. The WBC experience was incredible. This could be even bigger.”

Read the article by Jared Diamond in The Australian.