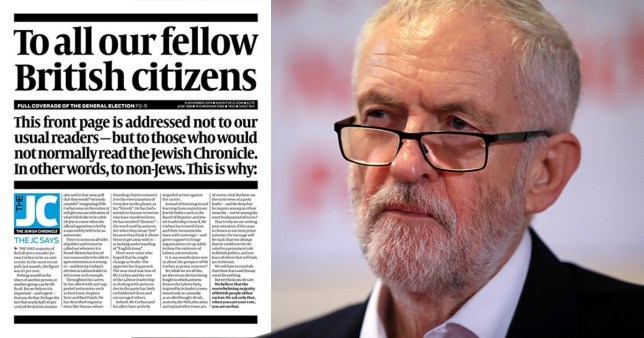 If you’ve not had your head in the news, the UK heads to the polls on December the 12th for a snap general election.

The candidates for PM are the incumbent, Tory Boris Johnson, and the unpopular Labour opposition leader, Jeremy Corbyn. Both, apparently, will be electioneering on a pro-Brexit platform. [Johnson’s widely tipped to win in a landslide.]

To make matters worse, Corbyn’s already off to a shaky start with not one but three senior members of his very own party urging people to vote against him.

Ian Austin, who was a minister in last Labour government under Gordon Brown, just called Corbyn an “extremist” who is “completely unfit” to be PM and would be a “total disaster for Britain” if elected.

Ever since becoming leader of the opposition in 2015, Corbyn’s pro-Palestine stance has been translated by media and the Jewish community as anti-semitism. He’s also been accused of ignoring festering anti-semitism amongst Labour’s rank and file.

And now Britain’s The Jewish Chronicle has used its latest front page to urge everyone – and not just Jews – to cast their vote for anyone but the Labour party on December 12.

According to the article, the “vast majority” (87 per cent) of British Jews consider Corbyn to be an anti-Semite and that nearly half (47 per cent) would “seriously consider emigrating” if he won the election.

Read the article in B&T magazine.