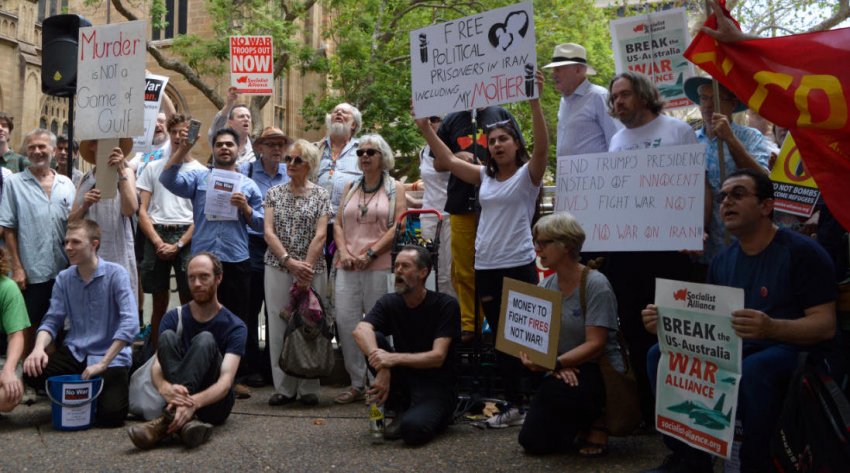 Protesters say no war on Iran

Activists joined in a global day of action against war in Iran, initiated in the United States by United National Antiwar Coalition. One hundred people took part in Sydney on January 25.

The protest took place on the eve of the mobilisations to mark the beginning of the colonial dispossession of First Nation’s peoples.

Nick Dean of the organising group, Independent and Peaceful Australia Network (IPAN), noted that: “IPAN understands all too well that the independent and peaceful nation we seek cannot be achieved without resolving past injustices and reaching a harmonious relationship between the First Australians”.

Deane said the US’ assassination of General Qassem Soleimani was not only a crime, it was also a “brazen violation of Iraqi national sovereignty” that was dragging the world into war in the Middle East.

“What is becoming clear is that ordinary people will no longer tolerate the war-mongering that is now such a feature of our times. There is, I believe, a growing realisation that the old ways of resolving differences – by resort to the extreme violence of war – are outdated and redundant. People the world over understand that war is never the resolution, whatever the problem.

“This is especially true now as we enter the climate crisis, evidenced by the ongoing bushfire tragedy. War is a driver of climate change, and climate change brings with it an increased risk of war.”

Read the article by Kerry Smith in Green Left Weekly.