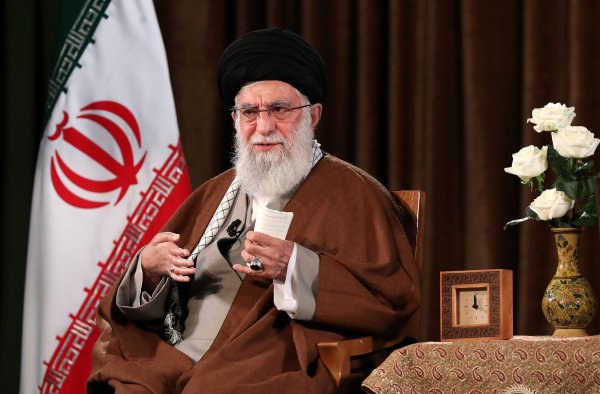 In this picture released by the official website of the office of the Iranian supreme leader, Supreme Leader Ayatollah Ali Khamenei addresses the nation on a televised speech, in Tehran, Iran, Sunday, March 22, 2020. Iran's supreme leader Sunday refused U.S. assistance to fight the new coronavirus, citing an unfounded conspiracy theory that the virus could be man-made by America. (Office of the Iranian Supreme Leader via AP)

Are Iran and the US Heading Towards a Conventional War?

While the world’s attention is focused on the COVID-19 outbreak and its repercussions, the US-Iran relationship has witnessed yet another escalation in tensions. On 11 March, Camp Al Taji, north of Baghdad, was attacked by rockets. The attack on the airbase, used by coalition forces, resulted in the deaths of two American soldiers and a Briton, and wounded 14 others. The US responded the next day by conducting air strikes against weapons storage facilities that belonged to an Iranian-backed Iraqi militia, Kata’ib Hezbollah. The following Saturday, 25 rockets that targeted Camp Taji were launched, which resulted in five people being wounded, two Iraqi soldiers and three American.

These events come just months after a similar sequence of events that started in December 2019 that led many observers question if Iran and the US are heading toward a conventional war.

To recap, on 27 December 2019, a Coalition airbase at Kirkuk in Iraq was attacked, resulting in the death of an American civilian contractor. The US response followed two days later, with strikes against five Kata’ib Hezbollah locations. Those strikes led to an attack on the American embassy in Baghdad by Iraqi militants and a number of their supporters. The US responded decisively, killing the head of Iran’s Quds Force, General Soleimani, in an airstrike near Baghdad International Airport. Iran tried to retaliate by firing missiles at another US military camp in Iraq, but that effort was overshadowed by Iran mistakenly shooting down a Ukrainian civilian aircraft, killing all on board. Washington showed constraint and did not react to the attack on its military base in that instance, however.