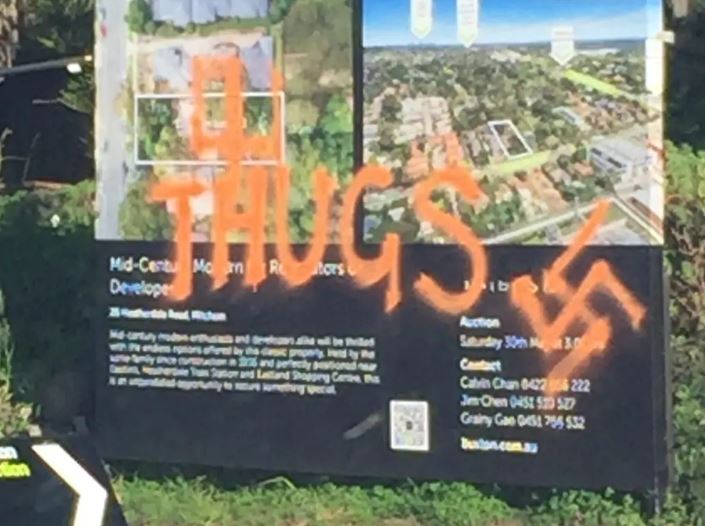 The Melbourne grandson of Holocaust survivors has bravely confronted a man wearing a Nazi swastika in a southeastern suburbs park.

David, 53, was walking on a track in Heatherton’s Karkarook Park about 5pm on Friday when he was “gobsmacked” to see a man casually riding past, wearing a swastika armband.

“Having grown up as the grandson of Holocaust survivors, it’s an emotive issue,” he said.

“When you see these sorts of things you get angry.

“It’s not the sort of thing you expect to see in Melbourne … it’s just horrible.”

The incident has prompted renewed calls from Australia’s Anti-Defamation Commission for the State Government to urgently ban public displays of the swastika, and prosecute offenders.

“It’s sickening to think that, in Melbourne, neo-Nazi thugs feel free to openly wear this symbol of genocide and evil, knowing that there is nothing Victoria police can do to stop them. What’s next, Heil Hitler salutes and Nazi flags in the CBD? Our city should not become a safe haven for these ‘Final Solutionists’,” commission chairman Dvir Abramovich said.

Swastikas were also seen plastered over a “For Sale” sign — next to the word “thugs” — outside a home in Heatherdale Rd, Mitcham, on Saturday morning.

David (who did not want to give this last name) told the Sunday Herald Sun he ran to catch up with the man wearing the swastika, and confronted him.

Read the article by Mandy Squires in the Herald Sun.