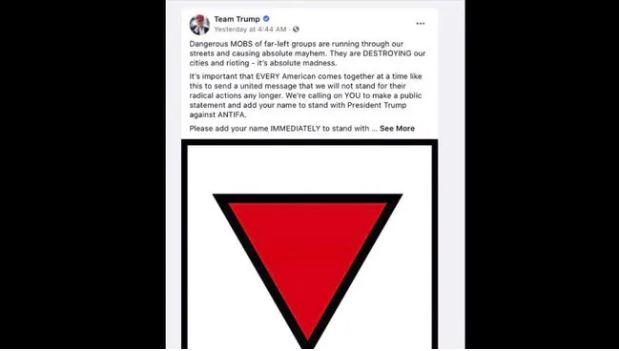 Facebook has removed campaign ads by US President Donald Trump and Vice-President Mike Pence that featured an upside-down red triangle, a symbol once used by Nazis to designate political prisoners, communists and others in concentration camps.

The company said that the ads violated “our policy against organised hate”.

A Facebook executive who testified at a House of Representatives intelligence committee hearing said the company did not permit symbols of hateful ideology “unless they’re put up with context or condemnation”.

“In a situation where we don’t see either of those, we don’t allow it on the platform and we remove it. That’s what we saw in this case with this ad, and anywhere that that symbol is used, we would take the same action,” said Nathaniel Gleicher, the company’s head of security policy.

The Trump campaign spent more than $US17,000 on the ads for Mr Trump and Mr Pence combined. The ads began running on Wednesday and received hundreds of thousands of impressions.

Trump campaign communications director Tim Murtaugh said the inverted red triangle was a symbol commonly used by Antifa so it was included in an ad about the anti-fascist collective. He said the symbol was not in the Anti-Defamation League’s database of symbols of hate. The campaign also argued the symbol was an emoji.

Read the article by Eric Tucker and Barbara Ortutay in The Australian.