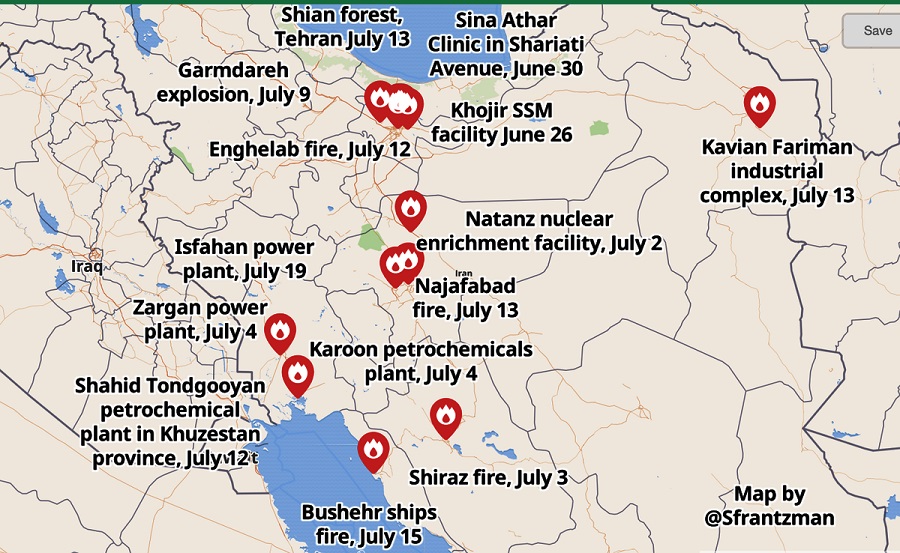 Iran has suffered a number of explosions, fires and computer crashes over the last month. On 26 June, an explosion occurred at a gas storage facility in Parchin, a town to the south-east of Tehran. Parchin houses a military base where, it is suspected, Iran has conducted nuclear weapons-related tests, including hydro-dynamic tests to assess how certain materials react under high pressure, such as occurs in a nuclear explosion. Parchin is also the site of Iran’s largest military-explosives production facility, including artillery rockets. State TV showed a mass of burned-out storage tanks and twisted metal structures. A defence spokesperson alleged that the explosion had occurred in the “public area” of the town. On the same day, an electricity pole caught fire in Shiraz, in south-west Iran, leading to blackouts across large parts of Shiraz and a loss of connectivity to the Internet.

Those occurrences followed a boiler explosion at a refinery at Imam Khomeini Port on the Persian Gulf coast on 24 May; a fire in the Chitgar forest west of Tehran on 2 June; a fire in a warehouse site of the Khuzestan Metallurgical Company, another at the Tehran refinery due to gas leak and huge fires at wheat farms in Semnan province on 3 June; major fires in Khuzestan Province in Iran’s west and Bushehr on the Gulf coast on 5 June; a major fire adjacent to the Islamic Revolutionary Guard Corps-managed Evin Prison in north-west Tehran on 6 June and another in Jahrom National Park on 7 June. There was a lull in the fires until 12 June, when one occurred in Hamedan. That was followed by another in Shurabad in south Tehran on 14 June, which allegedly spread across an area of about ten thousand square metres. Overall, more than 1,100 fires in the past three months have burned more than 150 square miles of Iran’s forests.

Read the article by Lindsay Hughes in Future Directions International.