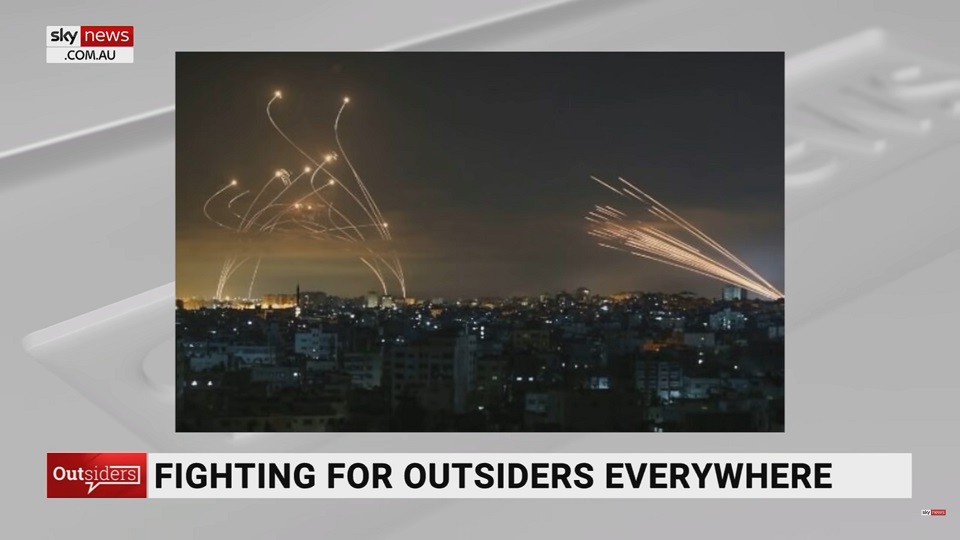 Sky News host Rowan Dean says everything people need to know about the history and future of the current conflict in Gaza and Israel can be condensed into a single photo.

The conflict in the Middle East has continued to broaden with violent clashes between Palestinians and Israelis spreading across the West Bank. “On the right-hand side of the photo, you can see the deadly rockets being fired out of Gaza in an aggressive and deliberately offensive act of war, designed to kill and maim as many innocent everyday Israeli citizens as possible,” Mr Dean said.

“On the left-hand side of the photo, looking like something out of Star Wars or Close Encounters, you see the Iron Dome, a technological miracle that allows Israel to shoot those Iranian and Hamas rockets out of the sky in a purely defensive act designed to save citizens’ lives.

“That is the story of the Gaza conflict and the history of Israel and Palestine. Pretty much everything else you will hear is obfuscation, distortion and lies, laced with the insidious moral relativism of the left.” Mr Dean said the rockets were supplied by Iran and funded in part by the Obama-Biden administration.

“The story of the last 70 years of Israel is summed up in this one photo – a small technologically advanced democracy constantly having to defend itself from vicious assault sponsored by the Arab regimes and Islamist fanatics that surround it encouraged and funded by globalist bodies.”

Watch Rowan Dean on The Outsiders.