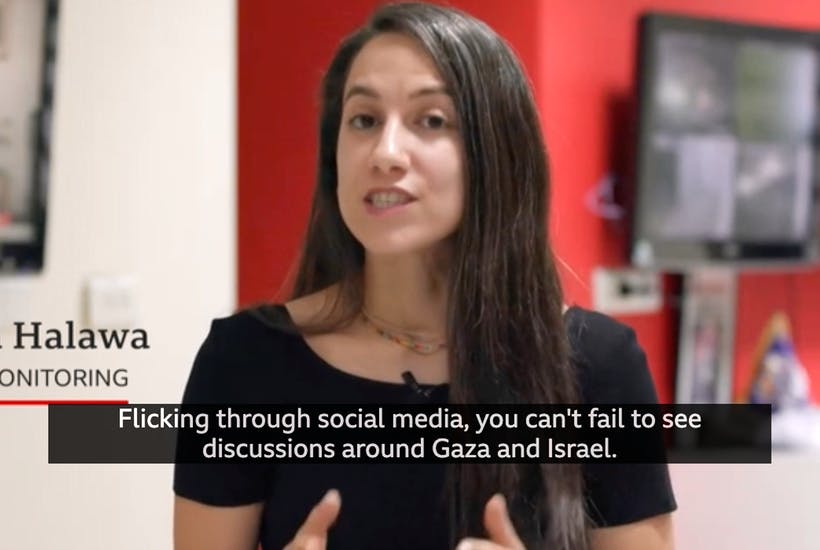 The tale of Tala Halawa has an ever-mounting horror to it: each sentence is more disturbing than the last. First we learn that this BBC journalist proclaimed during the 2014 Israel-Gaza war that ‘Israel is more Nazi than Hitler’ and that ‘Hitler was right’. Then we encounter her assertion that ‘ur media is controlled by ur zionist government’ and her sharing on Facebook the same image that saw MP Naz Shah suspended from the Labour Party in 2016, an image that advocates the ‘transportation’ of Israel to the United States to end ‘foreign interference’ in the Middle East.

Next up is a graphic Halawa tweeted showing a child being burned on a menorah, the candelabrum used in Jewish religious rituals, in an apparent reference to the 2014 torture murder of Palestinian teenager Mohammed Abu Khdeir by three Israelis. We might not need to hear any more by this point, but there is more nonetheless. Halawa, who is based in the Palestinian-run city of Ramallah, has declared that ‘Zionists can’t get enough of our blood’ and that ‘they’re are crying the holocaust every single moment but they’re practicing it every single moment as well’.

Somehow the horror doesn’t stop there. Halawa, it emerges, did not make these comments during her current employment with the BBC — she made them before being recruited. The BBC hired the ‘Hitler was right’ lady after she had stated publicly that ‘Hitler was right’. The awfulness isn’t even over, because what assignment did the BBC give the ‘Hitler was right’ lady? ‘Palestine specialist’ at BBC Monitoring. She has most recently produced a news video on model Bella Hadid ‘speaking out’ for the Palestinians and contributed to reporting on the deaths of children in the latest fighting between Israel and Hamas.