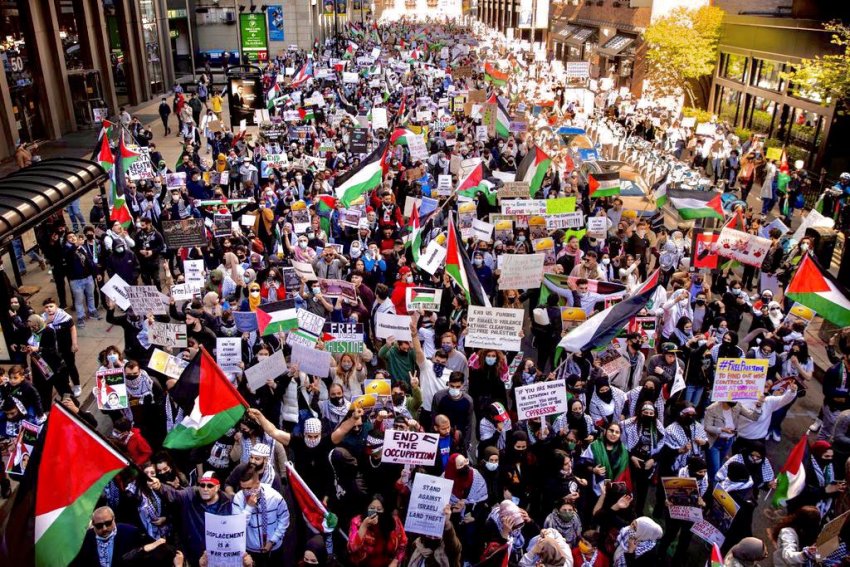 Palestinian Americans’ support for the resistance to Israeli occupation is growing, as support from other groups such as the Black Lives Matter movement has inspired them to stand up.

Many Jews have joined protests in the United States, including supporters of Jewish Voice for Peace (JVP). The JVP supports full equality for Palestinians and Jewish Israelis, and is the only major Jewish group to support the Palestinian civil society call for boycott, divestment and sanctions (BDS).

Marches and rallies in solidarity with the Palestinians have taken place across the country. Many marked the 73rd anniversary of Al Nakba (the Catastrophe), when more than 700,000 Palestinians were driven from their homes during the war that created the state of Israel in 1948.

A rally held in Santa Rosa, California, the heart of the state’s wine region, was sponsored by the North Bay Coalition for Palestine.

According to local media, speakers called for justice for the Palestinians.

“We are here because we are human beings who care about the suffering of other people,” Therese Mughannam told the Santa Rosa rally. She was born in Jerusalem before the British withdrew from Palestine and the state of Israel was created.

Protesters in many cities showed up with handmade signs. They marched and chanted in solidarity with the Palestinian community.

Read the article by Malik Miah, California in Green Left.