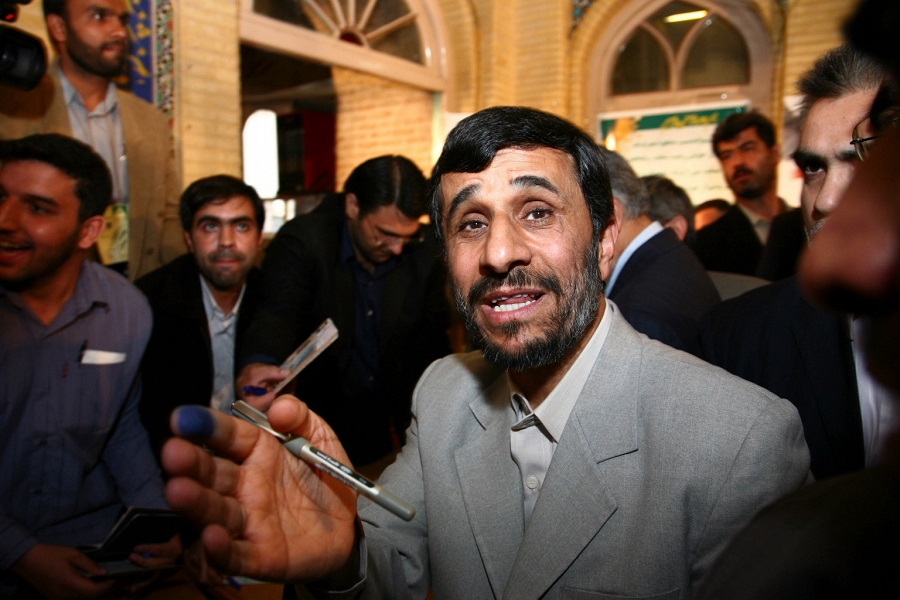 TEHRAN, IRAN - MARCH 14: Iranian President Mahmoud Ahmadinejad, shows his inked finger to the media before casting his ballot for the parliamentary elections at a polling station on March 14, 2008 in Tehran, Iran. Iranians have begun to vote in elections in which reformist opposition have been barred from running against President Ahmadinejad. (Photo by Majid/Getty Images)

Mahmoud Ahmadinejad’s two terms as Iranian president, from 2005 to 2013, are best remembered for his ideological zeal, aggressive foreign policy, and furious speeches against the United States and Israel. Since leaving office, however, he has mostly leveraged his skills of populist agitation against the Iranian system of government. This latter campaign reached a culmination this month when he registered to run for president again.

As expected, Ahmadinejad was ultimately disqualified from running. But this counts as a victory for the former president. He didn’t want to win the presidency this year—his plan is precisely to be prevented from winning, the better to present himself as a victim of a fundamentally unjust regime.

Upon registering for this year’s election at the Interior Ministry, Ahmadinejad immediately threatened to boycott the election should the Guardian Council—the conservative-led body in charge of vetting the candidates—decide to disqualify him. He also made it clear that he would also not endorse any other candidate.

Conservative figures were quick to react, criticizing Ahmadinejad for challenging the same electoral system he had earlier exploited twice to become president. But the former president had no desire to stop irritating his former allies. Instead, in a subsequent interview, he called himself a “liberal democrat,” a term often used by Iran’s hard-liners to discredit their opponents. He also went on to say that “I am not the Ahmadinejad you have in mind.” This latter part is the key to understanding his message: that he is no longer the person we used to know.

Read the article by Hamidreza Azizi in the Financial Review (from Foreign Policy).