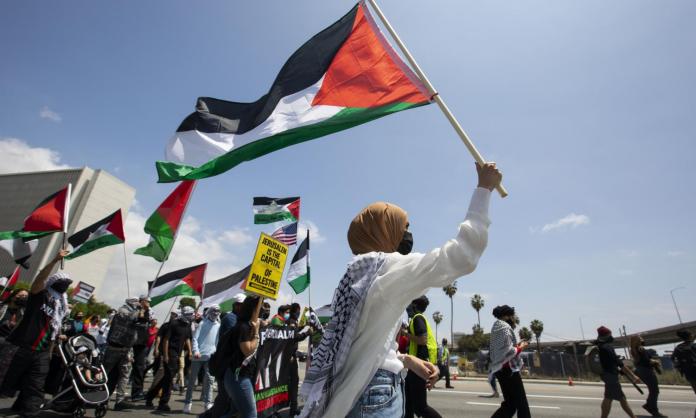 How can Palestine be free?

The following is a speech delivered by Omar Hassan to a post-rally event co-hosted by Socialist Alternative and Free Palestine Melbourne on 22 May 2021.

The Palestinians deserve nothing less than liberation. It’s easy to forget that in the daily discussions of bombings and sieges and settlements and so-called negotiations. While it’s fine to raise slogans around immediate issues, we need to keep sight of the long-term vision of liberation for Palestine.

What does that mean? It means demanding the right of return for all refugees, whether internally displaced or spread throughout the world. It means compensation for those who have lost their homes, either by providing an equivalent home in a place of their choosing or substantial financial reparations. And it means the creation of a single state—for people of all religions or none—across all of historic Palestine.

As soon as you think of the struggle in those terms, it becomes clear that it’s not an easy one. As with all struggles for justice, it’s ultimately a battle of power. And Israel has a lot of power. It is a nuclear-armed state with one of the world’s more powerful and battle-hardened military and intelligence apparatuses.

Beyond that, Israel has always benefited from incredible amounts of support from the main imperial powers. Its very existence is a product of a cynical alliance between Zionist ideologues and British imperialism after the defeat of the Ottoman Empire in World War One. After Israel declared itself a state in 1948, the new entity was immediately recognised by the USSR and the Americans, both of whom were keen to win the allegiance of what they rightly predicted would be a powerful military outpost of European settlers.

Read the article by Omar Hassan in Red Flag.

[Editor: In 2011 four pro-Palestinian supporters of an Israel boycott were arrested in Melbourne for breaching bail conditions following a protest outside a Max Brenner chocolate shop.

A spokesperson for the Victoria Police confirmed that the four proponents of the Boycott, Divestment and Sanctions campaign who appeared Tuesday in Melbourne’s Magistrate’s Court were among the 19 activists arrested July 1 outside the Israeli chocolatier in downtown Melbourne.

Police say they were among more than 300 protesters who marched July 29 on the Max Brenner store, thereby breaching their bail conditions. More than 10 of the 19 activists arrested July 1 had been ordered by the courts not to come within 50 meters—slightly more than 50 yards—of the chocolate shop.

Omar Hassan, who was among the 19 activists arrested July 1, said the four were released on bail, with three paying a surety of $2,000 and one ordered to pay an extra $8,000.]