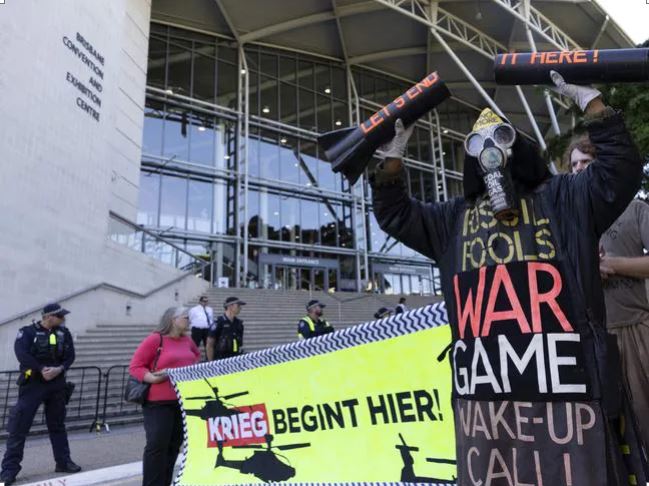 Police have returned to a Brisbane weapons exposition on Wednesday as dozens of anti-war protesters enter their second day of planned disruptions.

Eight people from “Disrupt Land Forces” were arrested on Tuesday after they allegedly smeared fake blood on the steps outside the Brisbane Exhibition and Convention Centre and disrupted Land Forces attendees from entering the building.

On Tuesday night, protesters projected photos of the “66 people killed in Palestine in the recent attacks” onto the building.

“Get Elbit out of Australia, Israeli weapons manufacturer testing weapons on Palestinians and coming to arms fairs to sell their wares to our part of the world,” the group said.

Protesters will gather outside of the Brisbane Convention Centre on the second day of a three-day international land defence exposition. Picture: NCA NewsWire / Sarah Marshall

“Militarism + extractivism = dispossession, famine, climate breakdown and ecocide. It’s all connected. So are we,” the group wrote in a Facebook post.

“At midday, join a prayer for peace at the main entrance. At 5pm, join a Dinner of Death parade.”