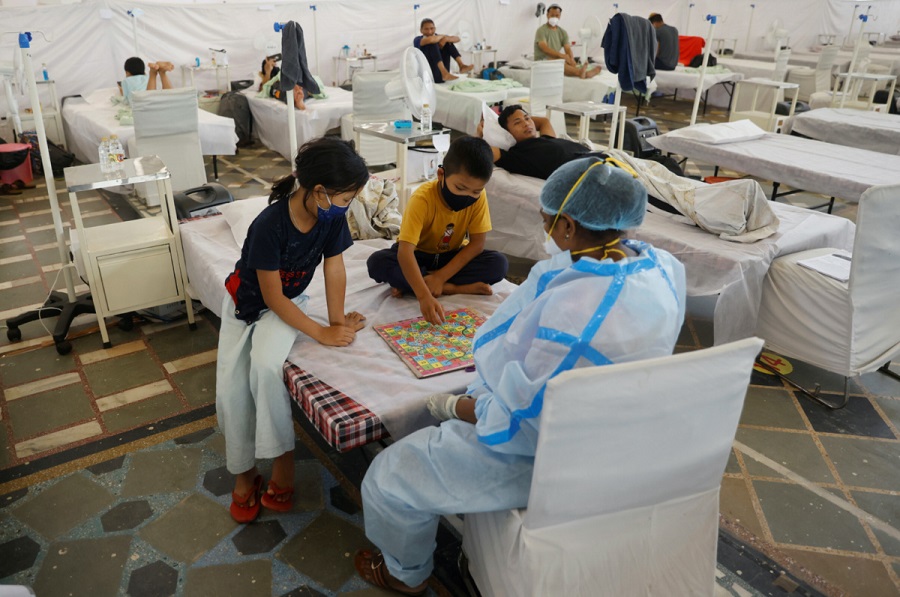 Indian Jew children, members of the Bnei Menashe, or the Children of Menashe, one of the "lost tribes of Israel" from the India's northeastern state of Manipur, suffering from the coronavirus disease (COVID-19), play a board game with a health worker at a COVID-19 care facility, inside a Gurudwara or a Sikh Temple, in New Delhi, India, June 2, 2021. REUTERS/Adnan Abidi

More than 100 Jews from India’s north-eastern Manipur state have had to delay plans to emigrate to Israel as family members fell ill with COVID-19 and were placed in quarantine in New Delhi.

Soizagin, 40, who will soon renounce his Indian citizenship, calls his permanent move to Israel a “golden opportunity”.

“We have been very excited,” said Soizagin who goes by only one name and is recuperating at a Sikh temple, which has been turned into a COVID care centre.

“[We’ve been delayed] just because of this COVID positivity. Otherwise..we should have left by 31st of last month.”

Soizagin is part of India’s roughly 6,000-member Bnei Menashe community, which lives largely in Manipur and neighbouring Mizoram state and has formally been recognised by Israel’s rabbinical leaders as Jews.

On Wednesday, about 40 Bnei Menashe were quarantined at the New Delhi Sikh temple, said Soizagin, who was dressed in an olive green T-shirt and black pyjamas and donned a Jewish kippah skullcap.

The tale of how Bnei Menashe or the “Children of Menashe” settled in an Indian region, sandwiched between Bangladesh and Myanmar, is grand in its sweep of history but short on scientific support.

Exiled from ancient Israel by the Assyrian empire around 730 BC, a tribe is forced east and travels through Afghanistan and China before settling in what is now India’s northeast.

Read the article by Adnan Abidi in Sight Magazine.