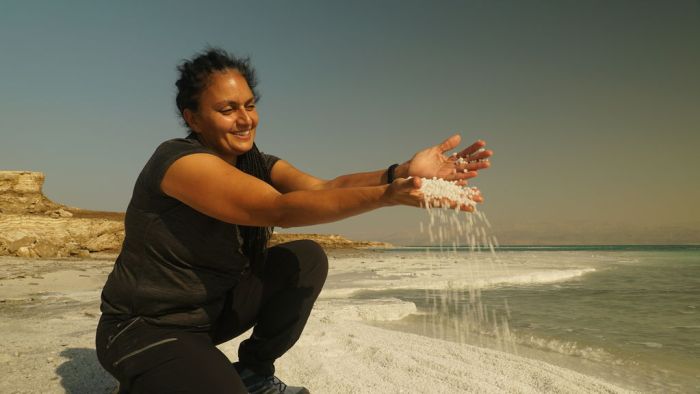 It’s the lowest place on earth. A sea in the middle of a desert. Fed by the waters of the Jordan River, nestled on the borders of Israel, Jordan and the West Bank, the Dead Sea has supported life and provided spiritual healing for millennia.

But today the Dead Sea is disappearing, its waterline receding year by year. And the fight over this diminishing resource is fueling tensions between Palestinians and Israelis.

In a visually stunning story, correspondent Eric Tlozek travels through this ancient land to unravel the mysteries of this vanishing sea.

Upstream in the Jordan Valley, the waters which feed into the Dead Sea have been diverted for agriculture and now there’s not enough to go around.

Zeyad, whose family lives in the Jordan Valley, says Palestinian farmers aren’t getting their fair share of water.

“They have a very big shortage of water. The water allocated for this village actually is less than 50% of the needed water.”

David, an Israeli farmer, says the Jewish settlers have used the water well, making an arid land productive and fertile.

Downstream, as a result of less water, the landscape around the Dead Sea is being dramatically transformed and is collapsing in on itself. It’s creating a strange phenomenon – ‘sinkholes’.

Highways which once teemed with traffic are now buckled and broken. Holiday resorts which once hosted families are abandoned and ruined.

“It’s a spectacular landscape that developed in a few years,” says an Israeli government geologist.

Meanwhile, the faithful still believe in the waters’ healing powers even though the water they bless now comes from sewage pipes.

“Once the water of the river is blessed…anyone that has any kind of pain or any kind of bad feelings he can wash himself with this water and he can be healed,” says an Armenian Orthodox priest.

There’s debate about schemes which could halt the sea’s decline but there’s little political will.

“Who will pay the price for this water?” asks one geologist.

This is an epic journey through a land with a rich history, a troubled present and an uncertain future.

“If our children will say that they wanted to save it, they can’t even do it because it’s too late. Everything that’s happening here, it’s because of us,” says Carmit, an Israeli hydrologist.

Watch the episode of Foreign Correspondent.

[Editor: The ABC anti-Israel propaganda line really kicks in at the 13:06 min mark.]