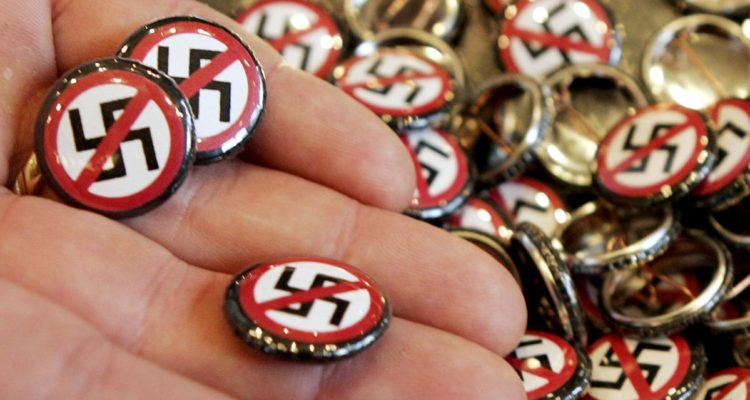 ** FILE ** Buttons with crossed-out swastikas are shown in a file picture taken in Bad Krozingen, Nov. 12, 2006. The Federal Court in Karlsruhe, southern Germany, on Thursday, March 15, 2007 ruled that the use of crossed-out Nazi symbols to protest far-right movements is acceptable as long as the emblems show a clear rejection of Adolf Hitler's party. The ruling throws out a widely criticized conviction by a Stuttgart state court where Juergen Kamm, 32, was found guilty of violating laws that prohibit the reproduction of the banned symbols, even though he clearly did so in protest of far-right extremists. (AP Photo/Winfried Rothermel)

Austrian man jailed for 19 months for swastika tattoo on scrotum

An Austrian man has been jailed for tattooing a swastika on his genitals.

The man, a soldier, was busted after bragging about the offensive ink and showing it off to army buddies during a drinking session, as well as posting photos of it online.

The 29-year-old neo-Nazi was jailed for 19 months under the country’s strict laws, which prohibit behaviour that glorifies the Nazis, as well as firearm charges.

According to reports, the man drank almost two bottles of whiskey before his brother tattooed the banned symbol on his scrotum.

He also was found to have posed for photos with Nazi material at the Bunker Museum Wurzenpass, drank ‘Hitler-branded wine’, and posted propaganda on the internet.

The court heard the man, who already had a criminal record for violent offences, was ‘embarrassed’ over what he had done.

“I just got in with bad company. For us, anything that wasn’t allowed was something we gravitated towards, but we all underestimated enormously how much a mistake this was,” he said.

He claimed he no longer associated with the far-right and had also stopped drinking heavily. He said he didn’t know how serious Nazi glorification was until the investigation into his tattoo and claimed it was no longer visible.