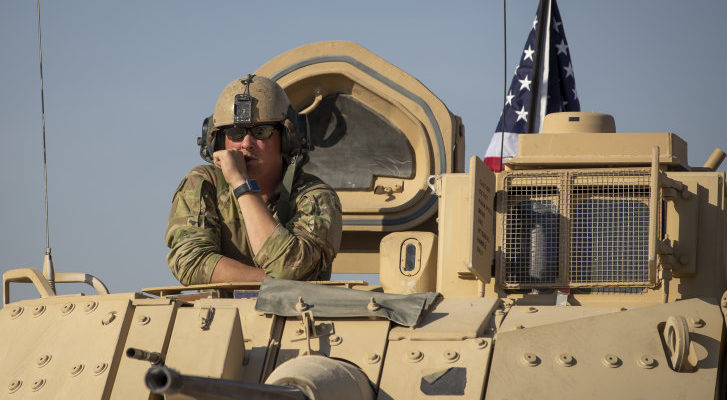 A US soldier looks out of a tank at an American base at undisclosed location in north-eastern Syria. (AP)

Washington: American forces in Syria have been attacked by multiple rockets, a day after the United States conducted air strikes on installations used by Iran-backed militias in the area.

Colonel Wayne Marotto, a spokesman for the coalition fighting Islamic State in Iraq and Syria, said on Twitter that the attack occurred at 7.44pm on Monday, Syria time (2:44am Tuesday AEST), and damage was being assessed.

He did not say who was believed to be responsible for the rockets.

A US military spokesman said there had been no injures or damage according to initial reports.

On Monday the Biden administration authorised air strikes in Syria and Iraq against Iran-aligned militias but the fighters vowed revenge and both countries condemned the unilateral move as violations of their sovereignty.

The US military said it had targeted operational and weapons storage facilities at two locations in Syria and one in Iraq on Monday in self-defence in response to drone attacks by the militia against US personnel and facilities in Iraq.

Iraqi militia groups aligned with Iran in a statement named four members of the Kataib Sayyed al-Shuhada faction they said were killed in the attack on the Syria-Iraq border. They vowed to retaliate.

“We took necessary, appropriate, deliberate action that is designed to limit the risk of escalation, but also to send a clear and unambiguous deterrent message,” US Secretary of State Antony Blinken told reporters in Rome before news of the retaliation attack.

Read the article by Phil Stewart and Idrees Ali in The Sydney Morning Herald.