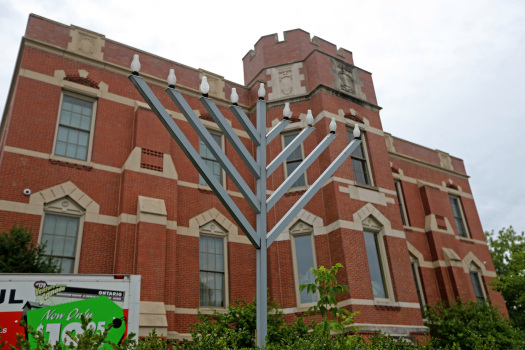 A Rabbi was stabbed outside a Boston synagogue Thursday afternoon, forcing the facility into a lockdown as a children’s day camp was being held when the attack occurred.

The incident happened at Shaloh House on Chestnut Hill Avenue around 1 p.m. The facility has a synagogue and school.

During the stabbing, the synagogue was holding the Gan Israel Day Camp for kids. Rodkin said the children and synagogue staff were safe.

Reports revealed that the suspect, whose identity is not yet known, approached Noginski while he was outside the Shaloh House. The suspect reportedly drew a gun and tried to force Noginski inside a vehicle. The Rabbi tried to run from his attacker and was stabbed in the arm several times.

The suspect has been placed in custody, according to multiple outlets.

The motive for attacking Rabbi Noginski is still unknown, but Robert Trestan of the Anti-Defamation League said the recent attack “sends a bit of a shockwave through the Jewish community.”

Trestan added that anti-Semitism has been increasing across the United States over the past several weeks, triggering fear among Jewish communities.

🇺🇸✡️ — BREAKING: Chabad Shliach Rabbi Shlomo Noginski was stabbed outside his chabad house in Boston this afternoon & was taken to the hospital in stable condition. Suspect had a knife & gun in his possession, taken in to custody. Please Daven for Rabbi Shlomo Ben Zlate Miriam. pic.twitter.com/iMVD3yBAbT

Read the article by Marvie Basilan  in the International Business Times.