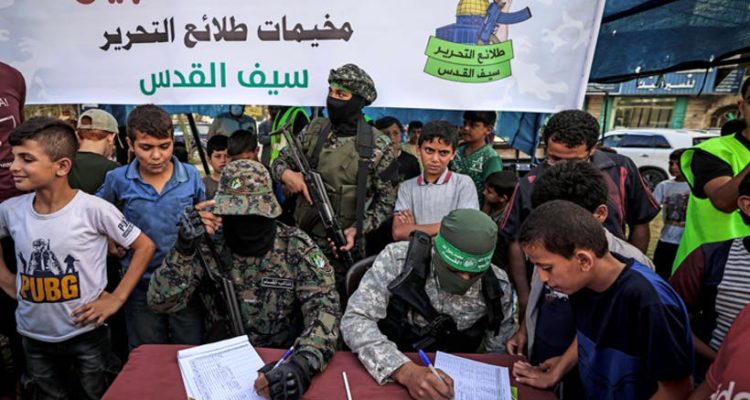 Hamas prepares the next generation of terrorists

The international community and mainstream media are shamefully ignoring a major destructive scandal in progress right now – the indoctrination of children into terrorism.

In the northern hemisphere it is the middle of summer and typically school children in many countries enjoy a mid-year summer break. Summer activity camps for children are a popular diversion worldwide. Most are focused on sport such as tennis or swimming, open-air activities including hiking, outdoor cooking and orienteering or perhaps building skills in music or chess.

But in Gaza things are different. During June, al-Qassam Brigades, the military division of terrorist organisation Hamas, together with Palestinian Islamic Jihad (PIJ), have been recruiting youth, typically in the ten to sixteen age range, into paramilitary training camps. Recruitment has been focused on schools run by the United Nations Relief and Works Agency (UNRWA) as well as in mosques. Desks set up in these schools and mosques are manned by armed terrorists in camouflage gear who encourage boys and their parents to book into a local youth training programme.

Hamas has run these camps since 2012 with the aim of mobilising a generation of young people capable of fighting wars against Israel. The so-called Vanguards of Liberation Camps have in past years attracted over 25,000 and possibly as high as 100,000 recruits. Abu Bilal, spokesman for the camps, explained at the launch of the monthlong camps, ‘We dubbed it (this year) the “Sword of Jerusalem” to symbolise what our people achieved during the recent escalation in Gaza. It is a generation that carries this sword to strike the enemy and liberate Jerusalem’.