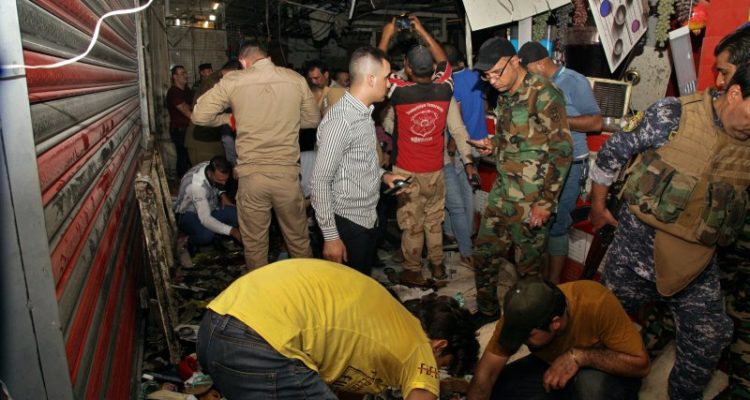 People and security forces gather at the site of a bombing at a market in Sadr City, Iraq. (AP)

The unidentified military official, quoted by the state news agency SANA, said Syrian air defences shot down most of the missiles in the attack that occurred just before midnight. The targets are still being identified, the official said.

The Britain-based Syrian Observatory for Human Rights, a war monitor that has activists on the ground in Syria, said the Israeli strikes targeted weapons depots that belong to Iranian-backed militia operating in Aleppo’s Safira region.

The group said the strikes were followed by loud explosions.

The weapons depots were located inside Syrian military posts, the group said.

The attack took place on the eve of Eid Al-Adha, one of Islam’s holiest holidays.

Israel has launched hundreds of strikes against Iran-linked military targets in Syria over the years but rarely acknowledges or discusses such operations. Last month, Israel reportedly carried out an attack on targets in central Syria.

Israel fears Iranian entrenchment on its northern frontier, and it has repeatedly struck Iran-linked facilities and weapons convoys destined for Hezbollah.

On the same night, two rockets were launched from Lebanon to northern Israel, setting off sirens but causing no damage or injuries. Israel’s military said it responded with artillery fire.

Read the article in The Sydney Morning Herald (AP/Reuters)