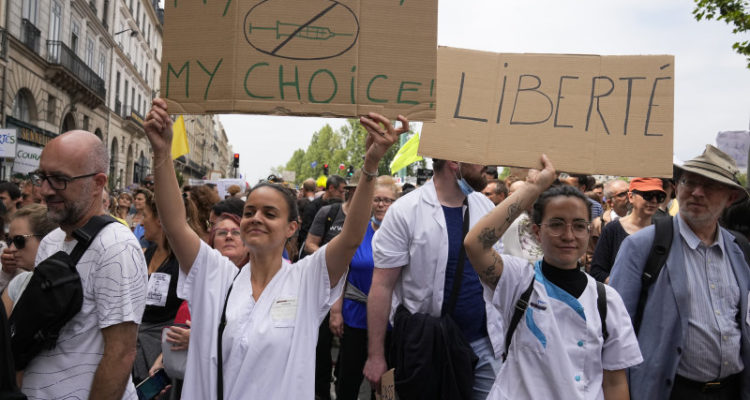 Nurses hold placards as they march during an anti-vaccine protest in Paris. (AP)

Anger as protesters compare vaccines to Nazi horrors in France

Paris: A French Holocaust survivor has denounced anti-vaxxer protesters making “hateful” comparisons between themselves and Jews who were persecuted by Nazi Germany during World War II, as part of a backlash against new rules mandating COVID vaccinations for healthcare workers.

As more than 100,000 people marched around France against the Macron government’s vaccine rules on Saturday, some demonstrators wore yellow stars resembling those the Nazis forced Jews to wear.

Others carried signs evoking the Auschwitz death camp or South Africa’s apartheid regime, claiming the French government was unfairly mistreating them with its anti-pandemic measures.

“You can’t imagine how much that upset me. This comparison is hateful. We must all rise up against this ignominy,” Holocaust survivor Joseph Szwarc said on Sunday during a ceremony commemorating victims of antisemitic and racist acts by the French state, which collaborated with Adolf Hitler’s regime.

“I wore the star, I know what that is, I still have it in my flesh. It is everyone’s duty to not allow this outrageous, antisemitic, racist wave to pass over us.”

Historian and former Nazi hunter Serge Klarsfeld also took aim at the analogy, stressing on Monday “the yellow star was a symbol of death that excluded Jews from society and marked them for extermination, while vaccines, on the other hand, save lives”. To equate the two, he said, was an odious comparison that served to trivialise the yellow star.

Read the article by Angela Charlton and Constantin Gouvy in The Sydney Morning Herald.