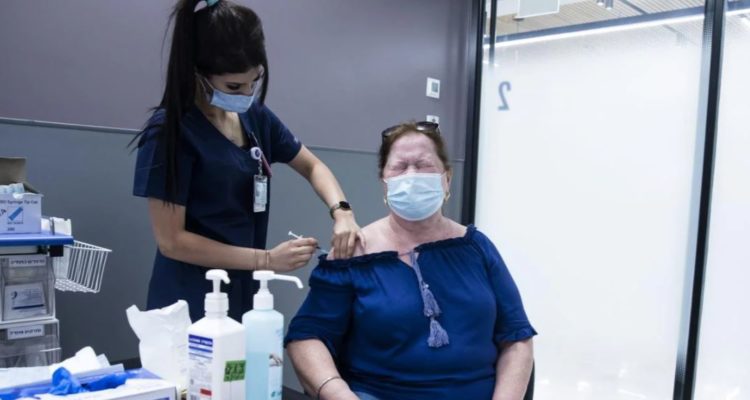 A woman receives her third dose of Covid-19 vaccine in Ramat Gan, Israel

The Pfizer vaccine may be less effective in older people, Israeli officials have warned, as an increasing number of double vaccinated Israelis test positive to the coronavirus.

A monitoring team at the Hebrew University in Jerusalem reported that about 90 per cent of new confirmed cases in the over-fifties group were people who had been fully vaccinated, the London Times reports.

“It seems there’s a reduced efficiency of the vaccine, at least for part of the population,” the team said. They said, however, that the research needed more analysis before they could reach any definitive conclusion about its efficacy.

The warning comes as the country fights a fourth wave that has been driven by the highly infectious delta variant, despite more than 60 per cent of the population being vaccinated.

Israeli officials have also advised that the vaccine is “significantly less” effective against the delta variant of the coronavirus.

“We do not know exactly to what degree the vaccine helps, but it is significantly less,” said Israeli Prime Minister Naftali Bennett.

Israel’s Health Ministry warned on Monday that the vaccine’s effectiveness against delta could be even lower than the readjusted numbers it published two weeks ago.

Earlier this month, the ministry lowered its projection of 95.3 per cent effectiveness across all coronavirus variants, to admit the vaccine provided just 64 per cent protection against delta. It said the vaccine was 93 per cent effective in preventing severe disease and hospitalisation, compared with the 97 per cent reported in the medical journal The Lancet in May.

Read the article by The Australian.