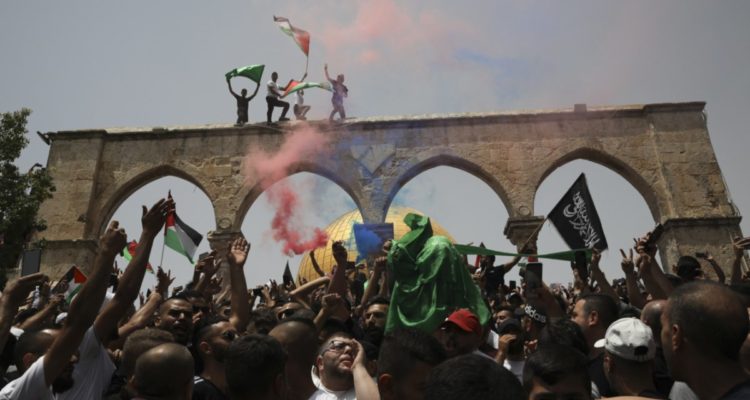 Palestinians wave national flags in front of the Dome of the Rock as a ceasefire took effect between Hamas and Israel after an 11-day war. (AP Photo/Mahmoud Illean)

A Jewish advocacy group has condemned a resolution adopted at a meeting of the United Church of Christ on Sunday that calls the continued oppression of the Palestinian people a “sin”.

The American Jewish Committee denounced the UCC resolution, a “Declaration for a Just Peace Between Palestine and Israel”, saying the measure “demonizes Israel, fails to offer a credible path to Israeli-Palestinian peace, and undermines advances in Christian-Jewish relations”.

The condemnation is the latest skirmish between Jewish advocacy groups and liberal Protestant denominations, including the United Church of Christ. Six years ago, the UCC, a denomination of about 800,000 members, drew the ire of Jewish groups and the Israeli Government when it approved a resolution calling for divestment from companies that profit from Israel’s occupation of Palestinian territories and a boycott of products from Israeli settlements.

The latest resolution is part of an increasing chorus of criticism aimed at Israel’s treatment of Palestinians. On Monday, Ben & Jerry’s said it would stop selling its ice cream in the Israeli-occupied West Bank and contested east Jerusalem, saying the sales in the territories sought by the Palestinians are “inconsistent with our values”.

The West Bank and east Jerusalem were captured by Israel in the 1967 Mideast war. Some 700,000 Israeli settlers now live in the two territories.