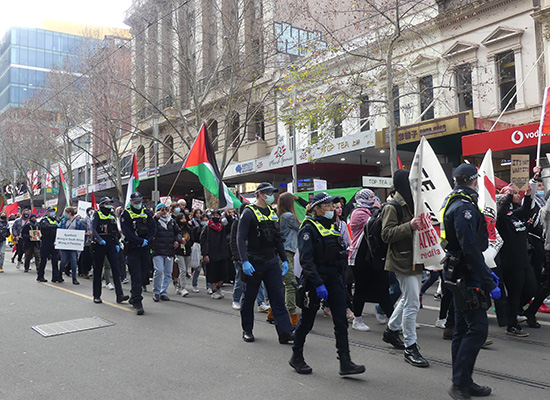 Third rally in a month amid rising tensions in Palestine

Hundreds gathered at the State Library in July for a rally organised by Free Palestine Melbourne for the third Pro-Palestine march in Melbourne’s CBD in two months, following the escalation of conflict in Gaza.

Free Palestine Melbourne is a community organisation dedicated to raising public awareness of the Palestinians’ struggle for freedom.

The peaceful protest consisting of speeches, poetry, music, and a march, was surrounded by heavy police presence including mounted and bicycle officers, and the Police Evidence Gathering Team on the outskirts of the rally filming attendees.

Evidence Gathering Team officers usually operate in teams of two, with a photographer or video camera operator and a spotter, they film or photograph individuals and crowds for evidence and intelligence purposes.

A ceasefire deal brokered by Egypt, Qatar, and the United Nations between Israel and Hamas was enacted at around 2.00 am on May 21 2021, ending 11 days of fighting.

Just hours after the ceasefire came into effect a skirmish broke out, in which 20 Palestinians were reportedly wounded, and 16 arrested, between Israeli police and Palestinians just outside the Al Aqsa mosque.

There have been multiple flare-ups since the ceasefire, including a series of incendiary balloon launches last month to which Israel responded with airstrikes.

Read the article by Matt Harvey in CBD News.