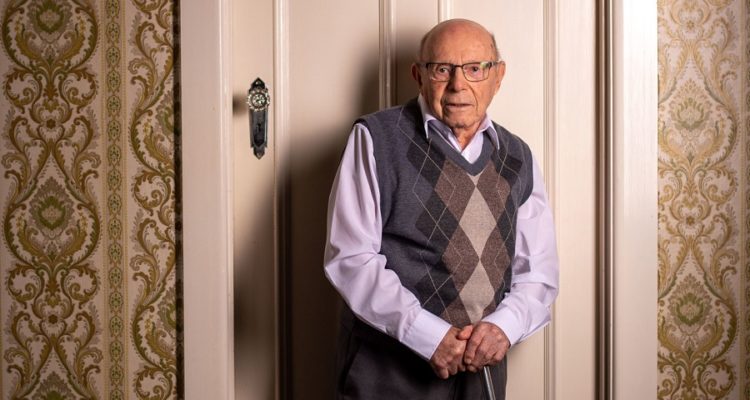 A Holocaust survivor’s lesson in optimism

Phillip Maisel thought he’d lost his twin sister during the war. Finding her again by sheer chance is just one of the things for which this (nearly) 99-year-old is thankful.

In the spring of 1944, Phillip Maisel had reached the lowest ebb of his life. Held captive in an Estonian labour camp, the 21-year-old Polish-born Jew and his fellow inmates were forced, every Sunday, to haul a pile of rocks from one end of an icy field to the other, back and forth, over and over again. It was back-breaking work, made even more miserable by their gnawing hunger and perilously weak physical states. The task had no practical purpose, since the workshops and shale-oil mines were all closed on this supposed day of rest, but their Nazi overseers had a unique talent for inflicting misery: this exercise in futility had been expressly designed to shatter the men’s spirits.

Sitting on their bunks one Sunday that spring, Maisel and his four friends were given just three potatoes to share, and Maisel’s portion was gone in a single mouthful. Hope was evaporating and death seemed near. “At a moment like that, anybody who is next to you is more than a friend,” says Maisel, who will be 99 next month. “They are part of yourself.” He asked his companions to make a vow: if any of them made it out alive, they would tell the world what the Nazis had done. They shook on it.

Maisel did survive – and made good on his promise. Painstakingly, over the course of three decades, he has recorded the video testimonies of 1000 fellow Holocaust survivors in Australia, helping younger generations walk in the shoes of their Jewish forebears. The collection of testimonies at the Jewish Holocaust Centre in Melbourne’s Elsternwick is his proudest achievement. And now, with the release of his memoir, The Keeper of Miracles, Maisel is adding his own remarkable story – of love, luck and resilience – to the record.

This morning, on a quiet, tree-lined street in North Caulfield in Melbourne’s south-east, Maisel answers the door of his tired but neat three-bedroom Italianate home. He is barely five feet tall and hunched over his walker, but he offers a jaunty elbow bump, his face breaking into a warm smile. Immaculately groomed, he wears a blue checked shirt, argyle woollen vest, grey trousers and black leather dress shoes.

Maisel lives alone (with weekday visits from a carer) in the same suburban family home he bought for his wife, Miriam, and their two daughters, Michelle and Yvonne, almost half a century ago. With its original red floral carpet and assortment of tiles and wallpapers, the house looks frozen somewhere midway through the 20th century. The living room is home to a collection of traditional Chinese and Japanese paintings, oversized Papua New Guinean tribal art, antique dinner sets and crystal chandeliers.

There are family photographs everywhere: his daughters’ weddings, the bar-mitzvahs and university graduations of his three grandsons, Robert, Nathan and Jason, and a Father’s Day photo montage on the wall. Maisel has been a compulsive snapper since he bought his first Leica in 1948 and, considerably more tech-savvy than most nonagenarians, has been posting to Facebook and Instagram for years, mostly pictures of the flowers, birds and changing colours at his local park, but also streetscapes and architecture, captured from curious angles.

Read the article by Susan Horsburgh in The Age.